‘Fix bayonets’: When a fire ignited mayhem in the Liberties

In 1873, Dubliners watched the City Saw Mills burn – unaware of the pending violence 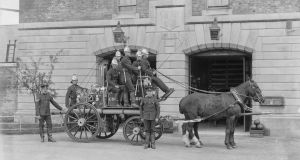 A horse-drawn fire tender at the Curragh Camp in Co Kildare, circa 1902. Photograph: National Library of Ireland/Flickr Commons

It was a Saturday night in Dublin when the fire started and the streets were busy with people. Attracted by the light from the burning timber at the City Saw Mills on Thomas Street, the curious flocked to take a look. The occasion would soon descend into a scene of “sanguinary and disgraceful” violence.

“About eleven o’clock the heavens were overspread with a splendid lurid glow, visible not only to the whole city and suburbs, but to those inhabiting a radius of many miles outside. I am told by a person who came today from the Curragh Camp, that it was distinctly observed there, and created much wonderment as to its cause,” reads an Irish Times report the following Monday, June 9th, 1873.

“Many, in the eagerness of their curiosity, called cars and ordered the Jehus to drive ‘to the fire’, and thus from all quarters of the city a stream of persons of both sexes of all ages and social degrees hurried forward, converging upon the scene of the calamity.”

Intense excitement followed. An uncapped hydrant provided early drama: “The flames from the well-stocked timber yard rose high with a fierce and steady flare, illuminating the adjacent buildings with noontide brilliancy. A yard or two from the entrance gate of the saw mills a hydrant had been unstopped, and a dense volume of water flew up a height of twenty feet or more into the air and descended in plashing showers of spray upon the streets, having something of the appearance of a monster fountain playing for popular show.”

Across the street from the saw mills, whose prominent entrance gate still stands today, the features of the recently-built St John’s church glowed in the light of the blaze; a detail not ignored by the reporter, who later remarked on the beauty of the disaster: “A calcium light turned upon the sacred edifice would not have displayed its beauties with a new dazzling glory the gilded mediaeval cross surmounting the steeple, and the croziers held by the prelatic figures shining with a lustre as of burnished gold, the whole standing out in bold relief against the background of black sky beyond.”

The facility that burned before the arriving Dubliners was owned by a man named Joseph Kelly. The property stretched southwards from the entrance on Thomas Street as far as Swift’s Alley and the quantity of timber Kelly’s site could hold was vast – several thousand tons. A major portion of the stock stood piled on end, making ready fuel for the flames.

Above the roaring came an order of 'fix bayonets'


Residents of Francis Street, fearing for their possessions, dragged furniture from the nearby buildings and arranged it on the street. Men and women sat on their beds in the middle of the road as the reporter recorded the harrowing cries of children “who could not realise the situation but had a vague idea of horrible peril”.

Overheating had sparked the blaze. It was discovered at 10.45pm by the sole watchman on the premises; the workers had gone home for a half-day. Captain Ingram was soon on the scene with his Fire Brigade, along with the Lord Mayor, about 70 Metropolitan Police constables and some soldiers from the 4th Battalion of the Rifle Brigade.

It didn’t take much to spark the riot. While some of the soldiers were carrying away unburnt timber, a young man – with drink taken and carrying a stick – began to mock the police in their efforts to manage the crowd. Swiftly, he was felled by the batons of two nearby policemen.

The move elicited anger from the onlookers – among them, our correspondent guessed, were no doubt inhabitants “of one of the most lawless districts of Dublin – the Coombe and Liberties generally.”

A shower of stones fell on the police. The first casualty was Constable 96A, who was taken to Meath Hospital with his head bleeding “profusely”. The Lord Mayor called for reinforcements from the military barracks, including detachments from the 13th and 97th infantry, a troop from the King’s Dragoon Guards, and others.

Reinforcements arrived, forming a line across the street. The reporter wrote that above the roaring came an order of “fix bayonets” and “as quick as light the sheen of the bright steel weapons gleaned in the light of the fire.” The soldiers charged, sending people “screaming” and retreating as quickly as the density of the crowd would allow.

What followed was a tit-for-tat between the police and the “mob” as the unrest sprawled onto Francis Street and Meath Street. The soldiers charged again, and their targets retreated down the laneways and halls, only to reappear and cover authorities with a fresh volley of rocks.

The Lord Mayor was struck in the chest during the fracas, “but not much injured”. We’re told he dutifully remained at the scene until the early hours.

In the aftermath, the most serious injury was to a man named George Carr, who had been stabbed in the bayonet charge. The blade had passed through his body, entering his back beneath the shoulder and passing “very near the heart”. Another man, Echlin Street resident Michael Toole, was stabbed in the hip by a soldier belonging to the 13th regiment, after being chased down by four soldiers.

Dozens, including members of the public, policemen, soldiers and firemen, were treated after the clashes. By the end of the evening, 24 people were lodged in Newmarket Police station, charged with taking part in the riot.

When the dust settled, the extent of the looting was found to be quite serious. A report the following day said a “mob of roughs” elected to “indulge their insensate brutality”. They targeted those who had brought their possessions to the streets in fear of losing them to the flames, making off with furniture, household utensils and clothing. What they couldn’t make off with, the paper said, they smashed.

The trial of 19 “rioters” – eighteen men and a woman – took place on June 20th and 21st. The prisoners were indicted with having “assembled riotously” with about 500 other people in the early hours of June 8th. There were a number of assault charges thrown in.

The trial at the Green Street courthouse had its comedic breaks, sometimes sparking laughter in court. The following is a portion of the questioning of a Rifle Brigade sergeant named Harris:

“[Harris] deposed that he saw the prisoner, Arthur Cromien, with his hand poised in the ‘hair’, as if to throw at somebody.

“Mr Nicholls (defence counsel): In whose ‘hair’ was his hand?

“N: Do you swear you saw him throw a stone?

“H: I saw his hand up as if in the ‘hact’, and I knew that he was one of those vagrants who were trying to injure ‘heverybody’ (laughter).”

The sentence hearing was less fun. Twelve of the originally indicted alleged rioters received sentences varying in seriousness; at the low end, Margaret Hynes – who was recommended to mercy – was sentenced to three months’ imprisonment, with hard labour. The worst sentence – two years with hard labour – was reserved for three men: the apparent ring leader Thomas O’Flaherty, Daniel Kavanagh and Patrick Connell.

In passing sentence, Justice Lawson left no doubt as to the court’s stance on the actions of the soldiers on the night of the violence, when he said “nothing appeared in this case to show that the military and police had not acted with the greatest forbearance. In one or two instances mistakes had been made, but the Crown did not follow them up.”