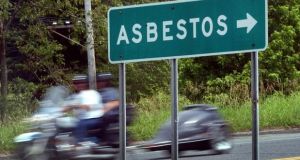 A sign for the Canadian town of Asbestos. Photograph: Bloomberg/Bloomberg via Getty Images

Things haven’t been easy for the Canadian town of Asbestos. Eight years ago, its largest mine shut down, leaving behind unemployment and a mile-wide empty crater next to the downtown core.

But the community in the French-speaking province of Quebec has also been forced to reckon with the fact that it shares its name with a notorious cancer-causing mineral banned in nearly 60 countries.

Amid growing frustration from residents, officials have launched a bold plan: renaming the town.

“There is really a negative perception around [the name],” Asbestos’s mayor, Hugues Grimard, told CBC News. “We have lost businesses that don’t want to establish themselves here because of the name.”

For nearly 150 years, the Jeffrey asbestos mine in the town east of Montreal was one of the world’s largest – and the biggest employer in the town. Over the years, however, as experts learned of the dangers associated with asbestos, the town’s name has become somewhat tarnished.

“The word asbestos unfortunately doesn’t have a good connotation, especially for anglophones, and it’s hindering the city’s plans to develop external economic relations,” said the town in a Facebook post, prompting some residents to bristle at the idea of changing the town’s name for the benefit of English-speaking businesspeople. Others expressed frustration that the town was abandoning its heritage.

In a follow-up post, the town acknowledged that the proposed change came as a “difficult decision” – but was nonetheless important for the economic survival of the community and future generations.

The new effort marks the second time Asbestos has tried to rebrand itself. In 2006 town councillors proposed the idea but received little support. While the current attempt will probably cost nearly $100,000, there is hope the move will bring attention – and potentially investment – to the region.

Some residents have advocated names that pay homage to the region, including City of Three Lakes. Others suggested reaching out to indigenous groups for guidance on the traditional names for the region.

Most suggestions, however, have been tongue-in-cheek, including Poumontousse (a portmanteau of words for “lung” and “cough”), the Hole, and Asbestos 2.0.

Asbestos plans to hold public meetings in early January before voting on the new name. – Guardian