French authorities are searching for owner 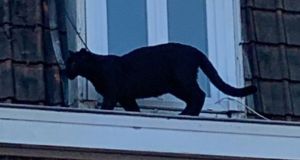 A young black panther seen prowling the roofs of a town in northern France has been captured by emergency services Photograph: French fire service

A young black panther seen prowling the roofs of a town in northern France has been captured by emergency services.

Residents of Armentières saw the feline walking along a second-floor ledge and going in and out of a window for an hour on Wednesday.

Police set up a cordon in case the panther jumped while rescuers entered the building quietly in attempt to not startle the large feline.

Among the rescuers was a vet who was able to tranquillise the cat.

The panther is four or five months old and had been domesticated by its owner, Kader Laghouati from the Animal Protection League organisation in Lille told La Voix du Nord newspaper. His nails were clipped, he is in good health and he was not aggressive, Mr Laghouati added.

Before it was rescued it had entered the building and entered an apartment where it startled a 15-year-old girl who ran upon seeing the panther.

However, the cat was not aggressive, her mother told La Voix du Nord.

Following its capture, the feline was handed over to government wildlife officials, who in turn handed it on to the Animal Protection League for one night.

It is unknown where the panther will ultimately end up but it has been transferred onwards to an as yet unannounced destination, La Voix du Nord reported.

Meanwhile, the French authorities are looking for the owner. They want to speak to the owner about where they got the animal from, what conditions it was being kept in and for endangering others.

A source told La Voix du Nord that only a zoo would have been able to get a permit for a panther.