Ear of the dog: study finds clever canines can recognise words and voices

‘This spontaneous ability is not uniquely human ... dogs share this linguistic talent’ 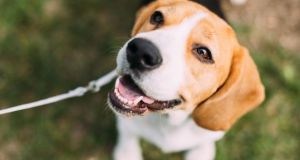 Some pet owners are convinced their dogs understand what they are saying, and even claim to have conversations with their four-legged friends. Photograph: iStock

Some pet owners are convinced their dogs understand what they are saying, and even claim to have conversations with their four-legged friends.

Now scientists say they may be right, with research showing that man’s best friend is able to identify when someone new is speaking, or when they are saying a new word.

Humans can recognise who is speaking from the voice alone, and can also recognise the same word spoken by different people.

Researchers from the University of Sussex looked at whether domestic dogs could also spontaneously recognise the same word when spoken by different people, including people they were unfamiliar with.

They filmed the reaction of dogs when they heard recordings of men and women speaking a set of short words that sound similar to each other, such as had, hid, heard and heed.

The dogs in the study were recorded hearing the same word said by different speakers, or the same speaker saying different words.

According to the study published in Biology Letters they were able to listen to different people saying the same word and recognise it as the same word, ignoring the differences between speakers.

The dogs also discriminated between unfamiliar people by the sound of their voice alone.

Dr Holly Root-Gutteridge, who led the research, said: “Until now, the spontaneous ability to recognise vowel sounds when spoken by different people was considered to be uniquely human.

“But many dog owners believe their dogs can learn a word from one person and recognise it when spoken by a second or third person.

“We wanted to test if dogs can recognise the same phonemes – the little sounds that make up words – when spoken by different people, ignoring the differences in accent and pronunciation.”

Researchers chose words that are not usually associated with commands, so the dogs’ reaction could not be due to training.

The dogs did not know the speakers, so were not responding to the sound of a voice they recognised, and they were not encouraged or rewarded with treats and attention.

Scientists say their findings suggest our four-legged friends can recognise short words as being the same when spoken by different people.

They could also tell the difference when a word with a slightly different vowel sound was introduced.

“This research shows that, despite previous assumptions, this spontaneous ability is not uniquely human and that dogs share this linguistic talent, suggesting that speech perception may not be as special to humans as we previously thought.”

A total of 42 dogs participated in the between-subject design study, with six tested under both conditions.