Uganda's parliamentarians recently made the news for brawling, two days in a row, over granting the president a further term, but they are not alone in getting physical in parliament. Video: David Dunne 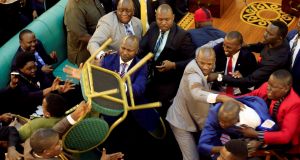 Ugandan lawmakers involved in a fight in the parliament ahead of proposed age limit amendment bill debate. Photograph: James Akena/Reuters

Earlier this week fighting broke out in Uganda’s parliament for a second day between lawmakers pushing for a change in laws to remove age limits for presidential candidates and those opposing it.

A Reuters journalist present in parliament at the time said he saw microphone stands being used as weapons, and at least two female lawmakers being carried out after collapsing. People exchanged blows and kicks after security personnel were called in to remove lawmakers who had been ordered out of the chambers.

The Ugandans aren’t alone however in resorting to fisticuffs rather than words to express themselves in parliment, as the above video shows.

Ukraine’s parliament is no stranger to scuffles and in December 2015 Oleh Barna – a deputy from the party of Ukrainian president Petro Poroshenko - walked up to the rostrum where the then prime minister Arseniy Yatsenyuk was answering questions on his performance, handed the premier a bunch of red roses, and started manhandling him. Barna pulled Yatsenyuk to the side of the rostrum and then grabbed him around the waist and groin, hoisting him into the air, before the premier’s allies dashed through the chamber to help, punching his assailant and hauling him away.

In 2015 Japan moved a step closer to allowing its troops to fight abroad for the first time in 70 years after a chaotic parliamentary vote on controversial security Bills. Live television pictures showed politicians scuffling inside the Diet (parliament) before an upper house committee approved the Bills.

Lawmakers pelted Kosovo’s prime minister Isa Mustafa with eggs in September 2015 as he addressed parliament, protesting over a deal with former master Serbia giving greater local powers to minority Serbs in the young Balkan country. Several opposition lawmakers suddenly stood and began throwing eggs at Mustafa as he made an address and his bodyguard rushed to shield him with an umbrella.

A few weeks later, on October 15th, two opposition lawmakers release teargas canisters in the country’s parliament again in a protest against a potential government accord with Serbia. In November, three opposition lawmakers were arrested in Kosovo amid chaotic scenes in parliament which filled once more with tear gas in a fresh protest on the same issue.

In May 2016, a brawl broke out in South Africa’s parliamentary as protection services forcibly removed members of the ultra-left Economic Freedom Fighters party from the chamber as they attempted to prevent an address by president Jacob Zuma. The party argued that Mr Zuma was not fit to address the house after recent court decisions against the president.

Members of Turkey’s ruling AK Party and Republican People’s Party exchanged kicks and punches at the parliament’s general assembly during a debate on constitutional changes that would expand president Tayyip Erdogan’s powers.

There were further fisticuffs in South Africa’s parliament in 2017 when Zuma’s state-of-the-nation speech descended into chaos as far-left lawmakers brawled and members of parliament traded insults, with one sign language interpreter signing them all.