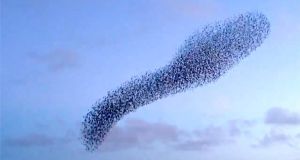 An ever-growing flock of starlings is starting to draw crowds to West Cork even in the depths of winter.

The flock - or murmuration - of starlings began gathering near Timoleague in early November but is continuing to grow and the birds’ extraordinary aerobatic display just before dusk every day is drawing ever increasing crowds.

Among those who gather to watch the extraordinary swooping and whirling mass of birds is artist and local resident Peter Wolstenholme of Birdwatch Ireland’s West Cork branch who has captured the stunning daily performance on video.

“A lot of the birds would have originated in Scandinavia and Russia but there are birds coming down all the time from further up the country where it’s cold and snowy.

“I estimate there are between 5,000 and 10,000 starlings which would make it the biggest murmuration we’ve had in West Cork.”

According to Mr Wolstenholme, starlings had a particularly good breeding season last year and he believes they may have settled on the Timoleague location because of a nearby wood which is adjacent to a pig factory which may be warming the immediate vicinity.

“The starlings feed off farmland but there’s a pine wood grown around a pig factory nearby and I think there’s probably heat coming from the pig factory and that makes the trees warmer than normal and that’s where they are roosting in the evening.”

Mr Wolstenholme explained that the starlings feed in small groups in the fields during the day before gathering together at dusk to sweep and wheel and soar in the murmuration which, he believes, they use to train the young to protect themselves.

“Why they do it is very complicated -they are obviously learning flying skills, they are learning how not to be caught by a predator - if they are on their own, a sparrow hawk can fly along in the field and just pick them up in its talons,” he said.

“But as soon as they go into a tight group, it confuses the bird of prey which has to have one thing to lock on to and catch, but if it’s a moving group, they can’t lock on to anything - there’s no leader in the murmuration, it’s just a mass thinking and movement.”

Mr Wolstenholme has been out to Timoleague every day - except Christmas Day - to watch the murmuration and while he has seen a peregrine falcon and Merlin both try to catch some of the starlings, the only bird of prey to have any success to date has been a sparrow hawk.

“When it first started there was a sparrow hawk there and he tried to attack the murmuration and got nowhere but very cleverly, he realised that if he went and sat in the wood where they all roost, he could just grab one and he came flying past me against the sunset with a starling in his talons.”

1 Shane Ross: ‘I lost a friendship with Mattie McGrath completely. He got totally personal’
2 Murder in a crowded house: The full story of the Patricia O’Connor trial
3 Coronavirus: Aer Lingus cabin crew in self-isolation after passenger’s positive test
4 ‘Nobody cares’: Children freeze to death as Syrians flee onslaught in Idlib
5 Areas advised to ‘stop everything’ as Storm Jorge hits Ireland
Real news has value SUBSCRIBE