The Republic must not bend on backstop, says State’s longest-serving diplomat

Michael Collins on Brexit, the peace process and the quest for a UN Security Council seat 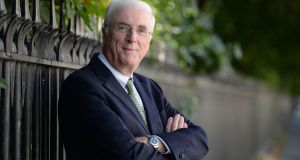 Ireland’s former ambassador to the US and Germany Michael Collins, who has retired after 46 years’ service. Photograph: Alan Betson

“And three children and one wife,” he adds, with a laugh.

His retirement in July on his return from Germany where he was ambassador for six years marked the end of 45-plus years as a diplomat. It was a long journey accompanied by his wife, Marie, who was a de facto deputy ambassador during most of his overseas postings given the 24-7 demands on a foreign envoy.

Collins is retiring at 66, a year later than usual for a diplomat. He has set a new record.

“I’m actually the longest-serving diplomat in the history of the Irish foreign service, considering that I joined at 20,” he says. “I’m very proud of that.”

The Dubliner was the longest-serving ambassador in the modern era to Germany and the United States, a posting that lasted from 2007 to 2013 and covered the presidencies of George W Bush and Barack Obama.

There were stints, too, as ambassador to Saudi Arabia from 1995 to 1999 and to the Czech Republic from 1999 to 2001 and earlier, lower-ranking posts in Rome, New York and Washington DC.

Collins gives short shrift to the old joke that a diplomat would do anything for their country but live in it.

“That’s not true,” he says, insisting the balance only skewed to service abroad in later years. “To be a diplomat and to serve your country properly, you have to have a balance there. Otherwise you lose touch and then you lose effect.”

He jokes that the six years (2001-2007) he served as second secretary general at the Department of the Taoiseach, which was responsible for the Northern Irish peace process, “count as double”.

One of his greatest career assets, Collins says, is his name, which has been `a bonus'

During that time he helped oversee significant diplomatic wins: the decommissioning of IRA arms under international supervision, a new international monitoring mechanism to supervise the cessation of IRA paramilitary activities, reform of policing in Northern Ireland and restored powersharing in Belfast.

“If I did nothing else in my life but be part of the resolution of those issues, I would be happy.”

Many other career highlights leap off Collins’s CV. As a senior official and later as ambassador accompanying taoisigh, he was present in the Oval Office on 12 consecutive St Patrick’s Days from 2001 to 2013. He was lead official in the Department of the Taoiseach when Bertie Ahern delivered his historic address to the House of Commons in 2007 and was ambassador in Washington when Ahern addressed a joint meeting of the US Congress in 2008.

“I have nothing to complain about,” says Collins, reflecting on his career as he settles back to life in south Dublin and the trauma of unpacking boxes after a dozen years overseas.

One of his greatest career assets, Collins says, is his name, which has been “a bonus”. During his time in the US, Collins recalls inviting the Portuguese ambassador named De Vallera (with two Ls) – a neighbour – over to “the residence” for a glass of Michael Collins whiskey, a drink he liked to impress his guests with.

Ireland’s then consul in Atlanta, Paul Gleeson, joked in 2013 on a visit by the ambassador that De Valera visited the American south in 1919 and it had taken 90-plus years but Michael Collins had finally made it too.

“My name has resonated in a way that I can only say ‘thank you’ to my parents,” says Collins.

It was not always that way. In the 1980s, in the aftermath of the IRA hunger strikes, when the diplomat was a press spokesman at the consulate in New York, republican sections of Irish America would use his name to “drag up all sorts of presumptions, that the government were too close to the Brits”.

A diplomat today has to do front of house. When I started in 1975, that did not exist

Collins says the “whole public diplomacy end” of Department of Foreign Affairs work has been the biggest change in his long career. It was previously “a very monastic place, almost; very cerebral, very hushed”.

“A diplomat today has to do front of house,” he says. “When I started in 1975, that did not exist. The embassies really had very little face to the world. Today, unless you are doing that, you are not doing your job.”

He is, unsurprisingly, an outspoken champion of the Government’s plan to double the diplomatic footprint around the globe by 2025. The presence need not be “extravagant”, he says, but “reasonable and effective.”

“It is a consequence of a much more complex world and a much more diversified Ireland in terms of our economic interests in particular,” he says. “Unless we are out there, somebody else will eat our breakfast.”

Collins dismisses the “vanity project” criticism of Ireland’s bid to win a seat on the United Nations Security Council, instead seeing it as a responsibility of a “sovereign country to be out there and playing our part”.

“The last time we were on the security council was 20 years ago, so it’s not as if we’ve been vainly looking for a seat every five years. Our turn is in or around now,” he says. “It’s not a case of vanity, it’s a case of obligation. We need to step forward.”

Collins says the Government was correct in pushing to have the post-Brexit arrangements for the Irish Border set as one of the three areas of negotiation between the EU and UK on the withdrawal agreement and is correct now in insisting that the backstop guarantee remain in the agreement. Where many at home see these as victories for Irish diplomacy, others abroad see red lines and intractable problems.

“We stepped forward to protect our interests. We found the member states of the European Union receptive and willing. It wasn’t just a case of Ireland having a view; it was a case of persuading and connecting with member states and the commission that this was a genuine issue that needed to be protected,” he says.

He notes that the issue of the Border was “blissfully ignored” during the UK’s Brexit referendum campaign. He points out how people forget that the Belfast Agreement also involved a referendum in the Republic and the Irish people giving up constitutional claim to Northern Ireland as a price for peace.

From his vantage point while ambassador in Germany, Collins says that any British hopes of succeeding with special pleadings in Germany or breaking EU member states’ solidarity regarding the Brexit deal that has broken the House of Commons are “misplaced”.

“From day one the Germans were very clear about the need to protect the single market and that there would be solidarity with Ireland. Of all the countries in the world they got the idea of the Border, day one, given their own history,” he says.

Everybody needs to be able to claim at least a modicum of success and victory so how that’s going to be achieved in [Brexit], I simply do not know

Collins sees the EU’s cohesiveness on Brexit as a demonstration of how “a smaller country’s interests can be protected by being part of a larger entity” and points to the 90 per cent-plus support for the EU at home.

As for a resolution to the current imbroglio, diplomats “talk in terms of win-win”, says Collins, but even Ireland’s longest-serving diplomat is bamboozled by how to find a fix.

“The nature of our business is that everybody needs to be able to claim at least a modicum of success and victory so how that’s going to be achieved in the current issue, I simply do not know,” he says.

After 46 years, including several around tense negotiating tables, Collins’s deserved retirement excuses him from duty on this one.