World needs to move away from neoliberal model, says President 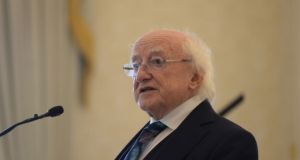 The world needs to move away from the prevailing neo-liberal economic model to one linking ecology, economy and society if humankind is to successfully address climate change, according to President Michael D Higgins.

The President said climate change is the most pressing issue facing people as a global community and the window of opportunity to act and address it in a meaningful way is closing at a worryingly fast rate.

Speaking in Cork City Hall, where he addressed a Conference on Intergenerational Climate Justice, Mr Higgins said “climate disruption is a global issue, a national issue and a local issue”.

Tracing the origins of the current crisis back to the start of the Industrial Revolution, President Higgins said increasing consumption was having a huge impact on natural resources.

“The impacts on the Earth’s dwindling natural resources are now all too apparent - rapidly declining biodiversity and accelerating climate change impacts brought about by global warming,” he said.

Warning humankind is “at the precipice of a global ecological catastrophe,” Mr Higgins said dangerous shifts in climate are putting stress on ecosystems which can no longer support populations and communities.

This in turn is contributed to conflict, violence, forced migration and exile with the population flows taking place in the context of both old and new conflicts that will undoubtedly be exploited by extremists, he said.

“Our basic human morality suggests that it is indefensible that another 100 million people be doomed to extreme poverty by 2030 should we fail to honour the commitment to tackle climate change.”

But tackling climate change places an onus and moral imperative on all people to make the necessary changes to their lifestyles if this current generation is to avoid bequeathing “a hostile and volatile Planet Earth” to the next generation.

Mr Higgins pointed out that “our prevailing neoliberal economic paradigm has been with us like a dark cloud for almost four decades now” with its opposition to regulation and the state playing any intervening role.

This paradigm was also characterised by “a culture of short- termism”. Inability to plan for the long term will have devastating consequences for future generations, he said.

Highlighting the importance of power, the President said the State has a potentially very positive role to play in policy decisions on issues such as energy, water and emissions, but people must reclaim the State in this regard.

The State has long been under attack “from an orthodox laissez-faire economic narrative, asserting the state’s role needs to be minimal and the private sector should lead in all aspects of life including the response to climate change.”

“Economic stagnation is the unexpected and unwelcome failure of a growth economy, such as we witnessed as a result of the financial crisis in 2008 and the so-called ‘Great Recession’ that impacted so disastrously on our country.”

Mr Higgins suggested that what is required instead is “a paradigm shift” in the connection between ecology, economy and society which will combine the radicalism of climate activism with the consciousness of egalitarianism.

“Consideration of a new ecological-social paradigm recognises the limits of the world’s natural resources as well as the role that unrestrained greed has played in creating the climate crisis,” he said.

But he cautioned that socio-economic measures will be required in the short and medium term to offset any adverse or regressive impacts of the ecological transition on lower socio economic groups such as those in legacy industries.

“In Ireland, this means those impacted by the closure of unsustainable carbon intensive electricity production must be offered re-skilling opportunities to enable them to find suitable jobs in areas such as the green economy.”