Noel Grealish knew exactly what he was doing 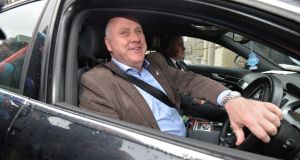 Noel Grealish has held the seat in Galway West since 2002, first for the PDs and afterwards as an independent. Photograph: Alan Betson

Two months ago Noel Grealish was recorded at a public meeting in Oughterard, called to discuss the potential opening of new accommodation for asylum seekers in the Co Galway town.

“These are people that are coming over here from Africa to . . . to sponge off the system here in Ireland, ” he told the meeting.

When Grealish’s comments came to light a media storm ensued with a heavy emphasis in many places on the obvious racist overtones. Grealish himself went to ground, refusing to give further comment. Didn’t apologise, didn’t explain. He was heavily criticised in the Dáil chamber (where he is not a regular attendee) and in the media.

A dog whistle is heard only by the dogs. This wasn’t a dog whistle. It was a foghorn

When contacted, however, many of his constituency colleagues and other public figures in Galway were reticent about condemning his views. The Oughterard story ran for several days. Everyone noticed. And people in Galway West noticed.

Grealish is a canny and experienced politician. He has held the seat, once occupied by Bobby Molloy, a co-founder of the Progressive Democrats, since 2002, first for the PDs and afterwards when the party was destroyed, as an independent.

If Grealish was ambushed by the recording of his remarks about Oughterard, he will have carefully evaluated the local reaction to them. And his comments in the Dáil on Tuesday – when he asked the Taoiseach about the “astronomical” sums of money being sent from Ireland to Nigeria – were prepared and scripted. He knew exactly what he was doing.

The most reasonable conclusion is that Grealish believes he is speaking to and for a section of his electorate that will appreciate these views.

TDs in all parties say they notice that anti-immigrant views, previously insignificant if not unknown, are now much more likely to be aired. No party tolerates such views and any TD who expressed them would be in hot water with the leadership. But independent TDs have no such concerns.

Last year, the independent presidential candidate Peter Casey turbo-charged his floundering campaign against Michael D Higgins by criticising special provision for Travellers and questioning the recent recognition of their separate ethnic status. The ensuing controversy helped to catapult him into second place in the election, and he ended up with almost a quarter of the vote.

The big vote for Casey led to all sorts of fears about the Trumpification of Irish politics – a flawed analysis which was entertainingly shared by Casey himself, who followed the strong showing in the election by pledging to join Fianna Fáil and become Taoiseach. (He is not, you will have noticed, exactly a fixture on the political landscape 12 months later).

But what the Casey vote did demonstrate is that there is a route to political advancement through attacking unpopular minorities using the stained but potent playbook of populism.

That is not the same thing as saying there is a huge political appetite for hostility to immigrants or Travellers. But there is clearly some appetite for it, and some politicians – primarily independents, free of party discipline, less concerned with what the media say – feel unconstrained in feeding that appetite for their own political gain. That is now a fact about our politics which is unlikely to be wished away.

This is bad news for the other politician in the spotlight this week. Old tweets by Fianna Fáil senator Lorraine Clifford-Lee, the party’s candidate in the upcoming Dublin Fingal byelection, using language offensive to Travellers and others, have landed her in hot water as the campaign begins.

Nobody thinks Clifford-Lee’s sins are on a par with Grealish’s outburst, but at a time when there is clearly a public appetite – limited but real – for picking on minorities, those who hold contrary values will feel more of an obligation to defend them.

For now Fianna Fáil is both furious with, and rallying around, her. But the candidate is only a few more tweets away from being in serious trouble. Grealish, meanwhile, is again keeping his head down.