Woman stranded in Ireland due to pandemic has ‘miracle baby’ 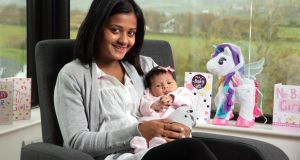 By the time her baby daughter, Leah was born, everybody at Letterkenny University Hospital knew Gimee Etwarysing. “They would say, ‘You’re the lady who got stuck here’,” her sister Swatee Dunne says. “She was the talk of the maternity ward.”

Etwarysing has been stranded in Ireland since March. She is from Mauritius and was visiting her sister and her family in Letterkenny, Co Donegal, when the first case of coronavirus was identified in her home country. Mauritius shut its airports, leaving Etwarysing – and other Mauritians – unable to return home.

But there was an added complication. Just before she left Etwarysing had discovered she was pregnant; the longer the lockdown went on, the less likely it was that she would be able to travel back to Mauritius to give birth.

She had her first scans in Ireland; at 21 weeks, it showed the baby’s growth was slowing down, and she was advised not to travel.

“I realised I was going to have to stay and have the baby here,” Etwarysing says. “I did feel less stressed after deciding to stay, I did accept it, but I was still homesick.”

Her partner and family back home in Mauritius were worried, “especially my dad – he was ringing every day to see if I was okay – and my partner was going to come and visit, but he couldn’t”.

All were thankful she was with her sister, especially as the pregnancy was a difficult one, with hospital appointments once and sometimes twice a week to check the baby’s growth.

There were also other stresses – over Etwarysing’s visa, which had to be renewed several times to allow her to stay in the country legally, as well as the financial implications. She is a revenue controller in a casino in Mauritius and has been unable to work since March. She paid for private healthcare and other expenses out of her savings.

Leah was born on October 8th, by emergency Caesarean section. Etwarysing emphasises how grateful she is to the doctors and nurses at the hospital, especially Dr Matt McKernan, for their medical care and support, and to the nurse who “stayed with me all night, and held my hand”.

Etwarysing’s brother-in-law, Joe Dunne, goes further: “The doctors in Mauritius had told her she would never be able to have children, and I don’t think Leah would have survived had she not been here in Ireland. She’s a miracle baby.”

Leah, now almost three weeks old, has become a favourite with the extended Dunne family and people in the local area.

“All the neighbours know her, and lots of them gave her presents when she was born,” says Etwarysing. “I was so surprised that even people who didn’t really know her would do that; it’s completely different here.

“I love the people here, they are so nice, and Donegal is absolutely beautiful, though the beaches are not the same – they are beautiful, but there isn’t the same weather as in Mauritius.”

She also collected plenty of souvenirs to remember her daughter’s stay in her adopted country – not least an Irish birth certificate and a photograph of her beside the Letterkenny hospital sign, “to show her when she’s older”.

She deliberately chose an Irish name so that her daughter would always have a connection to the country where she was born. “It means ‘the light of the sun’ in Irish, and her middle name is Shreya, which means ‘lucky’ in Hindi, so she has an Irish name and also a Mauritian/Hindi name.”

Her hope is that they can return in time to spend Christmas in Mauritius. The country reopened its airports at the beginning of this month and – though still unable to travel because of her Caesarean section – they may be able to fly back and quarantine for 14 days before the holiday period.

In Letterkenny, the whole family will miss them – not least Leah’s cousins Rory (8), Sophie (5) and Ethan (3). “She is like a little sister to them now,” says Swatee. “They look after her and every night they say a prayer for her, and before they go to school they come in to check on her.

“They’ve got very attached to her. Rory said the other day, ‘We’ve got seven in our family now’.”

“I do want to bring her back,” says Etwarysing. “Maybe she could even come and study here.”

For now, Leah sleeps soundly in her crib beside a window overlooking the green fields of Donegal. “At times I do think: is this even real,” laughs Etwarysing. “I have a big story to tell her when she gets older.”