Will the teaching unions align against the Government?

Two-tier pay the sticking point as ASTI joins dissenters, but strikes are unlikely for now 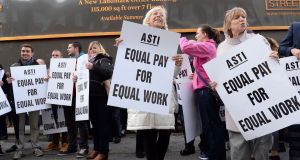 An ASTI protest outside Leinster House in 2016. Photograph: Eric Luke

The ASTI ballot result means all three main teaching unions have now voted to reject the new public service pay agreement, potentially leaving the door open to the establishment of a united front against the Government.

Members of the Teachers’ Union of Ireland and the Irish National Teachers’ Organisation had previously voted to oppose the accord.

However, the rejection of the deal by teachers does not necessarily mean there will be further industrial action in schools in the immediate future.

The teaching unions largely opposed the agreement on the grounds it did not end the two-tier pay structure that saw teachers recruited after 2011 receive less than those appointed before that date – due largely to the introduction of revised pay rates and the abolition of qualification allowances in the aftermath of the financial crash.

The Government has gone some way to reversing these measures, but the unions argue that a considerable pay gap remains. The Government has also put in place a new process to examine the issue of pay equalisation, in which the teaching unions are involved.

However, any ending of the two-tier pay structure will not be cheap. The Government has contended that pay equalisation would cost about €70 million to achieve in the education sector and more than €200 million across the entire public service. Separately, as the budget for 2018 has now been announced, it would seem that any ending of the two-tier system would not commence before 2019 at the earliest.

The ASTI central executive committee will meet in early November to consider the outcome of Monday’s ballot. It is expected at that meeting to review the decision it made last June to suspend a campaign of industrial action that saw schools close for a number of days last autumn.

As things stand, despite voting to oppose the pay deal, all teachers will receive the first 1 per cent rise under the agreement on schedule next January. A further 1 per cent will follow in October 2018.

However, that would change if a new campaign of industrial action was undertaken.

The Government also has in its armoury the provisions of financial emergency legislation under which it can impose significant penalties on groups considered to have “repudiated” a national agreement.

Last year financial penalties imposed on members of the ASTI when they were considered by Government to be outside the original Lansdowne Road agreement cost many teachers more than €2,000 in lost increments and supervision and substitution payments.

The Department of Education has warned that penalties could be reimposed if industrial action recommenced.

Critics of the pay deal in the education sector have called on the three teaching unions to join together and fight the Government.

That could still happen in time. However, in the immediate term a more likely scenario is that the various teaching unions will wait to see how the new talks process on pay equalisation plays out.