Wicklow ‘No Fry Zone’ to meet Harris over takeaway near schools 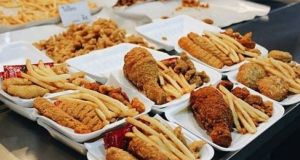 A group in Co Wicklow does not want any fast-food outlets with 400 meters of a school.

A Co Wicklow based ‘No Fry Zone’ group is to ask Minister for Health Simon Harris for Government support for a campaign opposing the building of a take-away near a three-school campus in Co Wicklow.

The move comes after Wicklow County Council granted planning permission for a take-away within a 400 metre exclusion zone around a three-school campus.

Greystones No-Fry Zone 4 Kids has campaigned for a ban on deep fried food outlets near the schools to be inserted in the County Development Plan.

Their campaign has been opposed by council management which twice granted planning permission to McDonalds restaurants for a take-away on a site opposite to school gates.

The group ultimately persuaded the owners of the site not to sell the land to McDonalds and went on to have the 400 metre ban adopted by councillors.

After the ban was written into the development plan, county management accepted an award from The Association for the Study of Obesity which recognised attempts to protect school children’s diet.

However, the council then granted planning permission within the 400 metre exclusion zone for a Chinese take-away.

The planned restaurant is due to be located in the premises of a former gym.

Wicklow County Council said it had approved the application on the basis that the take-away element of the business cannot open until 5pm.

Philip Moyles chairman of the No-Fry Zone committee said neither the elected councillors or the campaign committee made observations or objections to the application, on the assumption that it would be rejected because it contravened the council’s development plan.

On Friday Bord Pleanála ruled the No Fry Zone campaign could not appeal Wicklow County Council’s grant of planning permission as it had not made an objection.

Now Mr Moyles will discuss the matter with Mr Harris on Monday. Mr Harris has in the past supported No Fry Zone campaign.

Mr Moyles said he will be calling on the Minister and Government to bring in legislation “as going down the local planning route does not work”.

“I have no confidence in the local planning process and will be making this clear to Simon Harris as I’m meeting him on Monday evening. I will also making it clear that he needs to do everything in his power to introduce legislation” said Mr Moyles.

“We will focus now 100 per cent on national implementation and hope that we get a good boost after the summer recess with a national ban being recommended by Joint Oireachtas Committees for Children & Youth Affairs”.