Which test centres are you most likely to pass the NCT in?

Highest pass rate in any vehicle test centre is 55 per cent, according to latest statistics 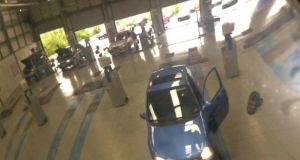 Kilkenny could be the best destination for those looking to pass the National Car Test (NCT), according to the latest figures.

In 2016 the test centre in Kilkenny passed 55 per cent of vehicles, the highest rate in the State, according to the statistics published by the Road Safety Authority. In total, 28,712 cars were tested in the county, of which 15,791 passed.

In second place for passing vehicles was Killarney (54.1 per cent), followed by Portlaoise (53.9 per cent).

The figures also account for tests marked “no identification” (0.7 per cent nationally). Photo ID is required for a test to be carried out. The figures also show that 5,789 vehicles (0.4 per cent) were in such poor condition when they were brought to a test centre they needed to be towed away.

According to the NCT website, motorists are allowed to book a test at any of the 47 centres nationwide. In a statement to The Irish Times, Sinead McKeon, a spokeswoman for NCT operator Applus, said a number of factors can affect the outcome at different test centres.

“The age-mix of vehicles tested in one location compared with another and this can affect the overall pass rate for that centre,” said Ms McKeon.

“This particularly affects some rural locations,” she said.

Other variables that influence pass rates at different centres include the prevalence of certain makes or models, differing use profiles of vehicles and the impact of different environments.

Poor road conditions also have an impact and can result in a more failures for brake and suspension problems in particular, said MsMcKeon.

Below are the top 10 centres for passes and top 10 for fails last year.

Reopening of schools in many EU countries has not led to Covid-19 increase, ECDE report finds 12:36
Meat factory workers’ living conditions and transport need to be examined, says disease expert 12:15
End of eviction ban will make it harder to find rentals outside Dublin, Simon Community says 09:57
Summer is on the way with warm sunny conditions for most of the next week 09:40
Covid-19: Public sector workers at home may be asked to foster children 09:34

1 Officials refuse to rule out ‘Midlands lockdown’ following Covid-19 surge
2 Reopening of schools in many EU countries has not led to Covid-19 increase, ECDE report finds
3 Masks Q&A: Who has to wear them in shops and what happens if you don’t?
4 How a ship abandoned by its owner brought deadly cargo to Beirut
5 Ireland's 'R number' of almost 2 a 'serious concern' as number of new cases jumps
Real news has value SUBSCRIBE