‘When will it stop?’ Priest urges end to Drogheda feud at funeral 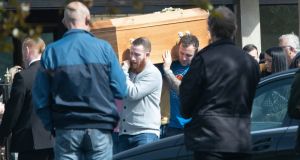 Keith Branigan’s remains are carried from the Holy Family Church in Drogheda after his funeral Mass. Photograph: Colin Keegan/Collins Dublin

On August 3rd, 2018, Rachel Branigan walked out of the Holy Family Church in Drogheda, arm in arm with her new husband Keith.

Yesterday, a year and a month later almost to the day, she helped carry his coffin from the same building, long curls of blonde hair tumbling across her shoulders, her mascara smudged and smeared by tears.

Determined nonetheless to play her part in his funeral, she walked behind the coffin, raising an arm high to help hold it, as six young men in jeans and polo shirts carried their friend shoulder-high out to his grave, the first fatality of Drogheda’s gangland feud.

A recording of Ed Sheeran and Beyoncé singing Perfect flooded every corner of the modern, pyramid-shaped church, and reduced to tears those not already weeping.

But darling, just kiss me slow

Earlier, during a rendition by soprano Amie of Jenn Bostic’s Jealous of the Angels, Keith Branigan’s sister Caitlin buckled over in the front pew, wailing in grief.

Branigan (29) was shot dead on August 27th as he worked on mobile home decking in a Louth caravan park.

Branigan was not a major criminal but he had a record for violent disorder, assault and for making threats against people. In 2011, he was jailed for two years for assault.

Wrapped into that sentence was time for another crime in which Branigan and two others vandalised a car and then broke into the home outside of which it was parked.

Inside, they beat up two men, using a table leg, a golf club and their fists. One of the attackers thought one of the men beaten up was sleeping with his girlfriend.

The feud that took Branigan’s life has been ongoing between drugs gangs based in Drogheda for the past 15 months. The 29-year-old was the fifth man to be shot as part of the violence, but the first to die.

Hundreds of people followed the hearse as it made its way to the church in bright sunshine and a light breeze. Overhead, a Garda fixed-wing plane and a Garda helicopter kept an eye on proceedings.

So too did two Garda Armed Support Unit Audi Q7s – one parked in a lane, facing outwards, watching; the other cruising along the narrow roads around the church, highly visible but not intruding; there but not there.

About 50 young adults hung around some corner shops, shuffling their feet, looking at the ground, talking occasionally. Half a dozen young men, several known to gardaí, stood in front of a nearby front garden wall.

Inside the Holy Family Church, the pews were filled by close to 500 people.

Gifts brought to the altar included a car steering wheel, a gold-coloured watch, a sunglasses case and two framed images: one a representation of a family tree; the other a €100 note. Beside them was Keith Branigan’s plain wooden coffin, his photograph and a small bunch of pink blush roses laid on top.

Fr Phil Gaffney said that no words of his could assuage the pain felt by the Branigan family. What had happened was, he said, “random, cruel and meaningless”.

Later in his homily, he said the readings gave the faithful hope for salvation in the face of death, and how human frailty would be transformed by resurrection.

“Keith goes to his death in a violent manner and we beseech the compassionate Lord to rest him in His eternal peace,” said Fr Gaffney, “and we pray that the healer of brokenness will heal what’s in all human hearts in order that the swords of war may be turned into the ploughshares of peace.”

Describing Branigan as a “bubbly character, full of life who made a deep impression on his family and was loved deeply by them,” he said his death had stopped the music in Drogheda “because some people want to continue a feud that has blighted our town now for the last 15 months”.

“Our sorrow can only be eased by turning away from violence and observing the rule of law, particularly for those who could be planning revenge . . . When will it stop? Who can make it stop?” he asked. “Only the men and women of Drogheda who want a better future for their children.”

A man in the Branigan family group buried his face in a white handkerchief and sobbed. Two women, one on either side of him, put their arms across his back for comfort.

There was no eulogy after the Eucharist – the diocese has a policy against them – but when the Mass ended, the young men in jeans and polo shirts stepped forward once more, lifted the coffin on their shoulders and carried it out.