What are the main points of the Defence Forces’ allowance raise? 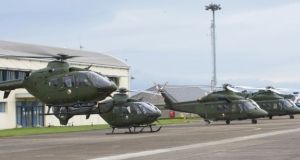 Members of the Defence Forces are set to see their take-home earnings rise immediately. File photograph

Members of the Defence Forces are set to see their take-home earnings rise immediately on Thursday as the Cabinet is expected to approve proposals for a €10.1 million package of increases in allowances.

However, the Public Service Pay Commission is expected to say it was constrained by its terms of reference from making recommendations on increasing core pay for Defence Forces personnel.

1 Military service allowance paid to most members of the Defence Forces should be increased by 10 per cent.

7 Some system of incentivising long service in areas where retention problems are being experienced - captain rank in all branches of the military, certain non-commissioned officer grades, particularly those with specialist skills -should be considered as priority in future pay negotiations

8 Recruitment methods for the Defence Forces should be reviewed

The report is also likely to highlight difficulties in retaining other key specialist personnel such as military aircraft maintenance technicians, air traffic controllers , engineering and ordnance officers in the Army and engineers in the Naval Service.

The commission is also expected to say it has evidence of retention difficulties at captain and certain non-commissioned officer levels and that some system of incentivising such personnel to remain in place should be looked at as a priority in future pay negotiations.

The report will also recommend that as a result of the absence of overtime or limits on working hours in the Defence Forces, cuts made to a number of other allowances in 2013 such as the security duty allowance and the patrol duty allowance for naval personnel should be reversed.

The report is expected to be published by Minster for Public Expenditure Paschal Donohoe and Minister of State at the Department of Defence Paul Keogh after the Cabinet meeting on Thursday.