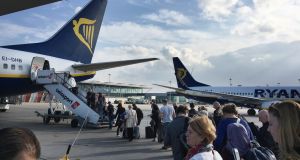 ‘This is an utter shambles,’ one Ryanair customer said. File photograph: Bryan O’Brien / The Irish Times

Ryanair revealed this week it intends to cancel up to 50 flights a day over the coming six weeks, although a higher daily number have been cancelled this weekend.

Irish Times’ readers affected by the unexpected cancellations have shared their stories.

‘Entire wedding party has been split up’

“We were unlucky enough to be affected in a pretty bad way,” writes Charlie Osman. His brother was marrying his partner in the south of France and his entire wedding party were stranded in Bergerac. “There are sick people, old people and people with children. We were not helped or advised at all from Ryanair and we had to all sort everything ourselves at our own expense. The booking was done by one person and he was informed of the cancellation via email. As we didn’t have internet access, we only discovered this last minute once we arrived at the airport.

He says the party was not offered alternatives. “We are on average all around €400 out of pocket, with one of the grooms still stuck in France until tomorrow. The entire wedding party has been split up, I had to fly to Southampton and make my way to London. Some are in the midlands, some Birmingham and some just decided to hire a car and drive. It feels like it’s put a big downer on the wedding.”

‘The kids will be devastated’

Noreen Brennan and her family are playing “Ryanair Roulette” as they’re due to fly from Cork to London on Friday, September 22nd and have no idea if the flight will take off. The trip is to mark Brennan’s eldest daughter’s 12th birthday and includes a visit to the Harry Potter Studio ,a present from Santa. “We have accommodation booked and paid for,” Brennan says. “We are due to fly home on Monday so are very tight timewise due to school and work schedules. Whatever about ourselves, the kids will be devastated! Currently lists of cancelled flights are just up to 20th September, which is of no use to us.”

‘Why was the flight available on their website at all?’

Eavan Smith, who lives in Amsterdam, was delighted in July when a friend from Dublin booked flights to visit the city this weekend. The flight was cancelled “with no explanation two days ago. On Thursday night we frantically tried to find cheaper flights and got a KLM outward one and booked the return again with Ryanair (stupidly). I booked the return yesterday morning and it was cancelled less than 24 hours later just before my friend was about to leave for the airport. I wonder why was the flight available on their website at all? They’d cancelled flights at that stage so surely they knew.”

In 10 days time, Suzanne Jackson and her family are due to travel to Majorca to celebrate her brother’s 50th birthday and her story captures the concern of many. “We are a family group of 10 and plan to stay for four days. We have booked and paid for everything including car hire, accommodation, flights and also as a collective birthday present we have booked a day on a motor boat to cruise around Majorca. “

Under the terms and conditions of the accommodation, the car hire and the present, the group could lose €6,000 if they can’t get to the Spanish island on time. “I’ve checked our travel insurance and as far as I can see there is nothing to say that insurance will cover these areas if the flight is cancelled by the airline because of its scheduling incompetence. Ryanair say that only 2 per cent of the flights are affected but they have now created uncertainty amongst 100 per cent of all passengers travelling over the next six weeks. It’s totally acceptable.”

She is also concerned about what happens if the return flight is cancelled while the group are there. “There are no other direct flights back to Dublin with any other airline. We would have to stay an extra two days in Majorca before the next Ryanair flight back. We all work, we all have jobs... how on earth are we supposed to manage this situation. The stress levels are so high with our family. Our elderly mother and uncle are very worried about the whole thing and are very upset about all the uncertainty. Although the flights haven’t been cancelled yet are we supposed to just sit and wait until they are and then reorganise everything? It’s a total disgrace.”

‘The three of us are disgusted’

Stephen Bourke was supposed to fly to Barcelona from Dublin at 6.15am on Saturday. “Ryanair only told us the flight was off at 10pm on Thursday. We had accommodation and car hire all paid for and this trip had been planned for months,” he writes.

He managed to get out on an Aer Lingus flight “but at enormous expense, €250 a pop for the three of us. Up to now, we had this all strictly budgeted and the extra flights have come close to doubling the group costs,” he says. “The three of us are disgusted at Ryanair’s behaviour and concerned our return flight next Saturday will be cancelled at short notice too. It’s putting a cloud over our holiday,” he says.

‘This is an utter shambles’

A reader who asked to identified only by his first name Derek had a week planned in Krakow from this Tuesday for four people. “This took four months of planning (hotels, hire car, time in the ski resort of Zakopane). As of 5.30pm Friday, this trip is now up in smoke, while Ryanair continue to pour out their PR guff on twitter and elsewhere,” he says.

“My friends have taken time off work and are now idle for the week. We have lost hundreds of euro on hotels. I feel like all of my planning has been completely wasted. Ryanair seem to be saying: ‘Don’t worry, this will only affect 2 per cent of flights’. This does not help my party one bit.”

His father has a flight booked for Faro next Tuesday week and his sister has one booked for Barcelona the following Friday for her husband’s birthday. “Right now, they have no idea if those long planned flights are going to happen. I myself have a trip to Malaga booked on 14th October, and a whole month out, I have no idea if it’s going to happen. Should I cancel hotels, car hire and if so, when? This is extremely annoying and will create stress for six bloody weeks.”

He says he does now know the “ins and outs of Ryanair’s tussles with the regulators or the EU and I really couldn’t care less. If one purchases a service, indeed if one favours a business by purchasing several services expected in the same six week period, one is entitled to notification of cancellation a whole lot sooner than this. For Krakow, I got four days. For Malaga, I’m supposed to sit around for a month and wait for them to decide if they can spare a pilot. This is an utter shambles.”