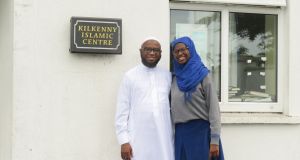 Imam Ibrahim Ndure with his daughter, Amie. ‘I feel like people don’t know enough, and that’s why they’re rejecting us. If they knew more, there wouldn’t be a problem,’ says Amie

Friday prayers have just ended in the Kilkenny Islamic Centre, a detached two-storey house in Talbot’s Inch, on the outskirts of the city.

The four-bedroom rented house, which has been home to the community for 12 years, is “totally unfit” for their needs. “Our children don’t have anywhere to play around here. The women have no space to do their activities,” says Imam Ibrahim Ndure. It is, he says, “a dire situation”.

It is Ramadan, and there were 100 people here earlier, which is more than usual – some prayer sessions have as few as five. That number was more than the conservatory prayer room could accommodate, and worshippers spilled outside on to mats set up on the rain-soaked grass.

Ndure’s daughter, Amie, is part of a new generation born in Ireland, whose needs the community wants to plan for as they enter adulthood. Those plans involved a new Islamic cultural centre that was to be built on Hebron Road, on a site that wraps around an Aldi supermarket. An Bord Pleanála’s decision to overturn permission for the centre on the grounds that it would be an “inappropriate backland development” was, Imam Ndure says, “heartbreaking”.

“I feel like people don’t know enough, and that’s why they’re rejecting us. If they knew more, there wouldn’t be a problem,” says Amie. Local political opposition to the mosque “has allowed people who were in the shadows to come out and say what they were feeling”.

Chosen after a nine-year search, the site was to have included a two-storey mosque with a dome and turret over parapet level; a halal cafe; a community centre; two guest apartments; two four-bedroom houses; classrooms; a shop and a mortuary. The mortuary was crucial, because the community has to travel to Clonskeagh to be able to conduct funeral rituals, including after the recent tragic death of a four-year-old boy.

Dr Wasim Asif, a consultant paediatrician at St Luke’s hospital in Kilkenny, is one of the trustees of the mosque, and was instrumental in the planning application. He is disappointed but accepting of the decision, which found that the plans “would be inappropriate, and would not make a positive contribution to the architectural and cultural heritage of Kilkenny city”.

He’s more concerned with “the way the campaign against the mosque was dealt with, and the way it was based on Islamophobia. This is my worry. Will Kilkenny be safe for us again?”

On the night before I visited the mosque, the community was gathered for prayers to celebrate Ramadan. For the first time ever, says Dr Asif, “we had to have people standing around for surveillance outside the mosque, so if anything happens we can alert people inside. We’re dreading that something like Christchurch could happen.”

Ndure and Asif say that earlier this week, a Muslim man was in a shopping centre in Kilkenny with his young daughter when “two white Irish men” approached and started verbally abusing him and insulting the prophet. On another occasion recently, “a woman was walking in the street, and somebody pulled her headscarf off”, says Ndure.

Most local people are welcoming and supportive, he adds, but some “vocal elements” are stoking up Islamophobia. “You have all these comments all the time, ‘Get out of the country. Why are you here? You Muslims are evil.’”

Asif chose to live in the city because it was a safe, inclusive place to raise a family. Now, he fears that’s changing. “If someone says to me, ‘go back to your country’, where do I go? I’ve spent 18 years [here], my children are Irish, my wife is British.”

Online, the mosque issue appears to have become caught up in other issues, including concerns about asylum seekers. According to the Department of Justice, there is no direct provision centre in the county, and therefore no asylum seekers. Since 2015, 111 refugees, mostly Syrian, have been resettled in the Kilkenny area.

“The Kilkenny Muslim community is from Pakistan, Bangladesh and the African community predominantly,” says Dr Asif. “Of the Pakistani population, over 90 per cent work in the hospital – they’re all doctors.” In Kilkenny hospital, he says, “maybe 70 per cent of medical doctor staff, especially the junior doctors, are Muslims. The Bangladeshi community are working in restaurants. And there are a few families that have their own businesses as well.”

On Friday, at the proposed site for the mosque, there’s not much evidence of Kilkenny’s architectural or cultural heritage. The derelict land, located in the middle of an industrial estate, has recently used for rubbish tipping.

A man in the Bishop Burch estate, tucked into the back of the industrial estate, says he is opposed to the mosque because “we don’t want any more hassle around here. They’re going to clash with the Travellers up the road, aren’t they?”

An elderly woman says she was worried about being disturbed by “bells ringing at all hours”. She looks genuinely surprised to learn that there wouldn’t have been any call to prayer, and that a lot of the doctors in the nearby hospital are members of the community who wanted the mosque. “I didn’t know that.”

Green party councillor Malcolm Noonan, who supports the need for a mosque in the city, believes the location “wasn’t ideal. There are significant issues with traffic in the area.”

But, he adds, “there’s no doubt that the fact that it was a proposed mosque had been latched on to by groups outside Kilkenny who have an anti-Islamic agenda. Kilkenny is an inclusive city and it’s an inclusive community. The refusal of the mosque is in no way connected to us not being welcoming. It’s unfortunate that some are using this as a kind of triumphalism.”

Now he hopes that the mosque can find a home in “a more prominent location, where the architecture of the building would be celebrated.”