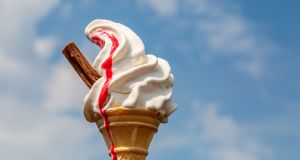 The closure order on part of Teddy’s Ice Cream on the East Pier in Dún Laoghaire has not yet been lifted. Photograph: iStock

A closure order was served on part of Teddy’s Ice Cream on the East Pier in Dún Laoghaire last month after rodent droppings were found in a storage area.

The order was served on a food and packaging storage unit at the side of the premises by the Food Safety Authority of Ireland (FSAI) on July 14th and has not been lifted.

“Food packaging and foodstuffs were stored in the [storage] area leaving them exposed to contamination by rodents,” the closure order states.

“The storage area was very poorly pest-proofed, with numerous holes, gaps and defects noted in the structure allowing potential access to rodents. Disturbed rodent poison was scattered on to the floor.

“A grave and immediate danger to foodstuffs exists in the storage unit because rodents can transmit harmful pathogens to foodstuffs and food packaging through their droppings and urine.”

In a statement, Teddy’s said the closure order was served on a storage unit for its concession at Dun Laoghaire’s East Pier.

“ This concession has been closed since the middle of March, to adhere to the Covid-19 Government recommendations. Before its closure, the unit was not used to store food for service. The issues outlined are being dealt with and the unit will not be used in the future,” it said.

“As a family business, we are heartbroken that there has been so much confusion as to the location of this storage unit and want to offer reassurance that this was not in an area that ever served or stored food.”

A closure order, which has since been lifted, was also served on all food sales at the AIM Cash & Carry in Clondalkin industrial estate in west Dublin. Inspectors found there was evidence of “recent rat activity” in the rear store area.

“Photographic evidence taken at the time of inspection shows an open chocolate bar under shelving in the rear store and rat droppings on the floor beside this partially eaten product,” the closure order states.

“There was evidence of packaging having been gnawed by rats and poison bait trays having been disturbed. The building is not adequately pest-proofed. There were gaps and holes in the external wall of the premises and at the shutter door in the rear store.”

Closure orders were also served on Indian Prince takeaway in Portlaoise; WW Poultry in Ballycoolen, west Dublin; and the deli counter and food preparation areas of Londis on Fassaugh Avenue in Cabra, Dublin. The orders on Indian Prince and Londis have since been lifted.

Dr Pamela Byrne, chief executive of the FSAI, said recent inspections had also identified some food businesses operating outside the law that were not registered or approved and therefore “selling food with no regulatory oversight for food safety and consumer protection”.

“A number of serious incidents have been identified where authorised officers found people operating out of food premises or vehicles where no adherence to basic food safety and hygiene practices were in place,” she said.

“A food business was found transporting unrefrigerated meat and meat products in the boot and back seat of a car. On another occasion, a wholesale business was operating in filthy conditions with unfit and out-of-date food, whilst another establishment had a significant level of unlabelled and untraceable food on its premises.”

Dr Byrne said enforcement powers were used to mitigate the risk in all of these cases but that the FSAI was concerned that it “could be reflective of a growing level of unscrupulous operators seeking to make a profit at the expense of public health”.

“We would urge consumers to question anyone offering them food for sale that seems unusual or that has no food labels on the packaging,” she added.

“We would also ask food businesses not to purchase food from unregistered/unapproved suppliers. Larger food businesses should ensure, when selling commercial quantities of food, that the buyer is a registered or approved food business operator.”