Visa-free access to Ireland being promoted at London seminars

Citizenship offered to ‘high net worth’ people via Caribbean islands 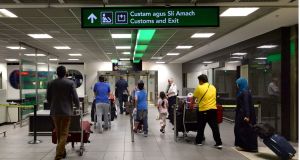 Documentation promoting schemes stresses the advantages of “visa-free travel” to countries including the Republic of Ireland. Photograph: Brenda Fitzsimons

Citizenship programmes for Caribbean islands that offer visa-free entry to Ireland are being heavily promoted in Britain.

Citizenships of Grenada, St Kitts and Nevis, Dominica and other locations are being offered to “high net worth” individuals and their families in return for “investments” for as little as €94,000 (US$100,000).

The schemes say they do not require “interview, residence, education or business experience” and can be as straightforward as paying into a fund for development of the sugar industry.

Documentation being circulated to promote the schemes stresses the “advantages” of “visa-free travel” to a number of countries, including the Republic of Ireland.

Schemes covering St Kitts and Nevis, Grenada and Dominica have been promoted at seminars in London, in brochures placed in upmarket London consultants’ rooms and advertisement features in magazines such as High Life, the British Airways inflight magazine.

Much of the interest appears to be coming from non-European citizens, according to those close to the seminars.

The Department of Foreign Affairs website lists the islands of Grenada, St Kitts and Nevis, and Dominica among the countries whose citizens are not required to have visas to enter Ireland.

The department referred questions on visa-free arrangements to the Department of Justice, which said citizenship of a visa-free state did not automatically mean access to the Republic. It said any foreign national, with or without a visa, may be refused entry by an immigration official at the airport or port of entry.

It also said such entrants from non-European Economic Area states must register with immigration authorities if their stay extends beyond 90 days.

The department said “it must be stressed that this scheme does not provide any entitlement to an Irish passport” adding it was “not in a position to comment on investor schemes in other countries or those who promote such schemes.”

Rules on what became known as the “passports for sale” were tightened up in the Republic after former taoiseach Charles Haughey was reported to have personally handed over passports to wealthy Saudi Arabians in a Dublin hotel over lunch in 1990.

In the Dominican scheme, citizenship is offered within three months with “no interview, residence, education or business experience requirement”, according to a brochure from international citizenship advisers CS Global Partners.

The brochures, which carry a forward by the prime minister, Dr Roosevelt Skerrit, identify the economic diversification fund as a “seamless route to citizenship in Dominica”.