Women TDs and Senators to form group to advance issues 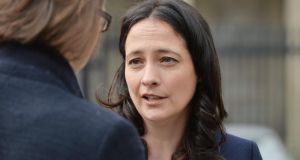 Green Party deputy leader Catherine Martin came up with the idea for a formal caucus of women TDs and Senators after her election to the Dáil last year. Photograph: Alan Betson

A formal women’s caucus is being established in the Oireachtas to give TDs and Senators a forum and a vehicle to advance issues.

It is the first time that women parliamentarians have come together in a formal way to highlight, and campaign, in this manner.

Green Party deputy leader Catherine Martin came up with the idea for the group after her election to the Dáil last year.

“Even though there was jubilation that there were 35 women Dáil deputies, the highest ever, we are still very much a minority.”

She said the gender imbalance was most visible during walk-through votes when the relatively small number of female TDs became apparent among “a sea of suits”.

In all there are 63 women TDs and Senators out of 208 parliamentarians in the Oireachtas.

Ms Martin convened a gathering of women TDs and Senators on Tuesday in Leinster House where the decision to form the caucus was approved.

Three guest speakers also spoke of models used elsewhere, as well as outlining what role such a causes could play. They were Orla O’Connor of the National Women’s Council; NUI Maynooth lecturer Claire McGing; and Niamh Gallagher, co-founder of Women for Election.

Some 16 TDs and Senators attended the meeting. Ms Martin said they were drawn from all the parties and from Independents. So far, it is understood only one woman parliamentarian has expressed any reservation about the group.

A meeting will be held next week to formally establish the caucus and select a chair.

Ms Martin said it would be up to the caucus to decide its agenda and its membership. In France, for example, female and male MPs are entitled to join. In Romania, men can be associate members.

Among the issues it could advance, she suggested, were violence against women, better maternity supports for female politicians, and the gender pay gap.

She said female parliamentarians had come together informally in the past but this was the first opportunity for them to come together and identify common causes, for which they could campaign.

Another aim of the group would be to increase the number of women in the Dáil and the Seanad to parity. “A caucus such as this one will help strengthen cross-party co-operation on important issues,” she said.