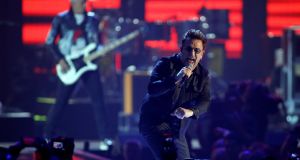 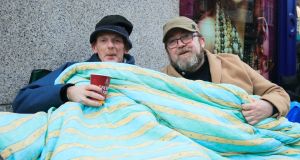 Vincent Kearns (left), from Rathfarnham, and Dave Griffith, from Terenure, who both queued a long time this month to secure tickets for U2 in Dublin this summer. File photograph: Gareth Chaney/Collins

The Government has been advised to take the same approach to ticket touts that the US administration took to mafia boss Al Capone.

“They couldn’t get him for murder but they got him on taxes,” Independent TD Michael Healy-Rae said.

He was one of a number of TDs who questioned the cost of tickets for U2 and Coldplay concerts in Dublin later this year.

It was noted that, after Ticketmaster had sold out tickets for both artists within minutes, tickets reappeared subsequently on the Ticketmaster-owned site Seatwave for multiples of the face value of the tickets.

Mr Healy-Rae highlighted the cost of Coldplay tickets, which went on sale on Ticketmaster for between €69 and €144 but subsequently appeared on Seatwave for €200 to €1,000.

He asked whether these sites were “paying tax on their exorbitant profits”.

“If you can’t get them one way, get them another,” he told Minister for Enterprise Mary Mitchell O’Connor.

Ms O’Connor had warned that whatever measures were taken to deal with ticket touting, they had to make sure ticket resales were not driven underground and away from established marketplaces, which at least offered guarantees to ticket buyers.

Most EU member states did not ban or regulate ticket sales. “Irish consumers will not be better off either if legislation here causes ticket resale to be diverted to countries that permit it,” she said.

The Government last week issued a consultation document on touting and asked interested parties to make submissions which would be fully assessed to take the most effective route to deal with the issue.

Her department had looked at primary and resale markets, and also at what other countries were doing to deal with the issue.

He added that three simple measures could be imposed on Ticketmaster to prevent touting where the commission on ticket resale was at least 15 per cent to 20 per cent of the cost.

Mr Rock said the number of tickets any individual could buy could be limited. The debit or credit card used to buy the ticket should be produced at the concert, along with photo identification.

Mr Donnelly asked whether it was a cartel situation and whether ticket websites were violating anti-trust laws. “Are they violating consumer protection laws and do companies like Seatwave get privileged access to Ticketmaster tickets?” he asked.

The Wicklow TD said there had been numerous such cases, of which U2 was the latest a few days ago.

He said it involved the reselling of tickets at bulk at the very same time that the monopoly seller Ticketmaster was sold out.