Meeting between UCD, Dublin Bus and students on drivers’ refusal to serve college 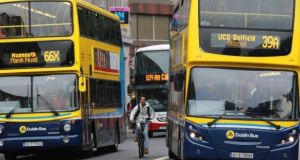 UCD students union are asking Dublin Bus drivers to “stop tarnishing everyone with same brush” after it suspended routes near Belfield due to antisocial behaviour. Photograph: Nick Bradshaw

UCD management and Students’ Union representatives are to meet Dublin Bus on Thursday in a bid to resolve a situation in which bus drivers are refusing to serve the college after 10pm.

However the meeting will not be attended by representatives of the drivers’ union, the National Bus and Rail Union, as they have not been invited, NBRU general secretary Dermot O’Leary said on Wednesday.

UCD Students’ Union President Barry Murphy said some late night services were passing students at the college’s main gate, leaving the students with little option but to get taxis which they could ill-afford.

He said “hundreds” of the 28,500 students and 6,000 staff who study and work late in UCD were greatly inconvenienced by the drivers’ action.

Mr Murphy said: “We want Dublin Bus drivers to feel safe and we are asking them to come up the ramp of UCD and to stop if they are not witnessing any threat to their safety.

“As it stands they are deciding to drive through long before they reach sight of the stop. We want them to know that UCD have security there to ensure anyone engaging in anti-social behaviour will be removed from the stop and not allowed on buses.

“We want to encourage Dublin Bus drivers to give students a chance to get home affordably and to confirm that the safety and comfort of drivers is something we care about. There has to be a solution to this.”

Anecdotal reports from drivers who did not want to be named said their fears centred around crowds of up to 40 students at a bus stop late at night who may have been in the bar, and had on one occasion pulled a ceiling down, while on others had rocked the bus from side to side.

A spokesman for UCD said he was aware of occasional instances of buses not serving the college at different times over the years but he could not confirm if the current late night avoidance was a continuous or sporadic issue.

Dublin Bus said a number of services have been affected “by anti-social behaviour issues which has resulted in some services not serving this stop after 10pm”.

“While we appreciate the inconvenience caused, the safety of our employees and customers is of paramount importance.”

However Mr O’Leary said that engagement had not extended to his members who were on the front line “unless I am missing a text or something”. Mr O’Leary told The Irish Times he regretted that “some” had “resorted to megaphone diplomacy” and had not thought to engage with the drivers’ union.

“Anybody could call me”, he added.

Mr O’Leary declined to instance the complaints against the students but said there was “a history of bad behaviour”. He said in other problem areas Dublin Bus had a forum involving drivers and the local community, which met reliquary to solve such issues.