Vicky Phelan going to US for months of experimental cancer treatment

‘If this trial works I will get more time with my kids,’ CervicalCheck campaigner says 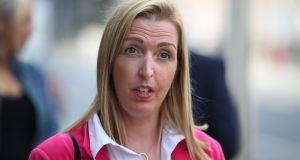 “I do not look like a sick person… It doesn’t take away from the fact that I have about 10 tumours in my body,” Vicky Phelan said. Photograph Nick Bradshaw / The Irish Times

CervicalCheck campaigner Vicky Phelan will travel to the United States on Sunday for experimental cancer treatment.

The Limerick woman will spend at least six months away from her family while undergoing experimental immunotherapy in Maryland to shrink her tumours.

While she says she has a pain in her chest at the prospect of leaving her children, it was a “no brainer” decision, as the alternative is palliative care,she said.

“I am not ready for that, and I am the type of person who will try something else… If it doesn’t work I have no regrets,” she said.

Ms Phelan was diagnosed with cervical cancer after receiving an incorrect smear test result that failed to flag any abnormalities three years previously.

The mother of 15-year-old Amelia and nine-year-old Darragh was speaking to Ryan Tubridy on The Late Late Show on RTÉ.

“I rationalise by saying this is short-term pain for long-term gain. If this trial works I will get more time with my kids… probably two or three years,” she said.

Asked if she has any fears, she said: “Do you know what I am scared of most? It’s not coming back or coming back in a coffin. I know that sounds very brutal but that would be my biggest worry. That is why I am getting upset about leaving on Sunday because you don’t know if I am going to come back.”

Ms Phelan said she doesn’t suffer with too much pain unless she is standing, when it becomes “merciless”. She has five tumours surrounding her aorta, a tumour in her auxiliary node, one under her arm, one in her groin, and a new tumour in her lung.

“I do not look like a sick person… It doesn’t take away from the fact that I have about 10 tumours in my body,” she said.

Pembrolizumab, a type of immunotherapy that stimulates the body’s immune system to fight cancer cells, which Phelan started in 2018, has given her three years of life, she said. She described a “football-sized” tumour that left her bed bound that shrunk to half its size within three weeks of using the drug. However, the drug is only effective on 60 to 70 per cent of her tumours so she researched other options.

There remains a five per cent chance that tests and scans will rule her as ineligible for the clinical trial in Maryland, but there is also a slim chance that she could go into full remission. The immunotherapy drug is similar to Pembrolizumab, and she should know after two months if it is having a positive effect.

Ms Phelan said she “wouldn’t get too excited” about the prospect of full remission, saying she would be satisfied with two or three “really good quality” years.

A unique portrait of the health campaigner was unveiled on the Friday night show. The artwork, by Tullamore artist Vincent Devine, will go on sale to raise money for Irish charity Heroes Aid, which was set up in response to the Covid-19 pandemic. Ms Phelan, who was appointed to the board of Heroes Aid as a ‘patient advocate’, urged people to donate to the cause. The ‘Triptych Portrait of Vicky Phelan’ goes under the hammer on February 4th at Sheppards’ Irish Auction House.