Veteran Dublin street trader Tessie Carroll has died aged 88. In June, 2019 Tessie brought her pram of clothes and bric-a-brac to the Cumberland Street market for the last time after 60 years of trading. Video: Kathleen Harris 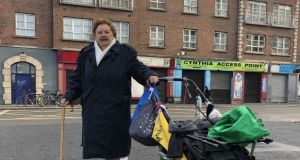 Tessie Carroll for 60 years wheeled her pram full of clothes and bric a brac from her Hill Street home to her pitch at the flea market on Cumberland Street North.

Veteran Dublin street trader Tessie Carroll had “an amazing sense of humour, a big heart and an infectious laugh”, her funeral has heard.

The 88-year-old, who had been a strong advocate about the rights of street traders during her long career, died on January 12th.

Every Saturday morning for 60 years before her retirement in the summer of 2019, Tessie would wheel her pram full of clothes and bric-a-brac from her Hill Street home to her pitch at the flea market on the street known on most maps as Cumberland Street North.

She and her fellow traders knew the street, which runs parallel to O’Connell Street, by different names. They called it “the Cobbles”, even though the stones that gave it the name were paved over “donkeys years ago”. More often that not Tessie referred to it simply as the Hill.

Speaking at her funeral Mass on Monday morning, Tessie’s daughter Jean described her as a “true Dub”.

Tessie and her husband and their growing family moved into a newly-built two-bed flat on Hill Street 62 years ago. Her husband worked for CIE at the time, but with young children to rear, Tessie decided to sell on the hill for extra money.

Her daughter said it didn’t take Tessie long to learn the “tricks of the trade”.

“Almost every Saturday for the next 60 years, in the hail, rain, sleet and snow, 5am in the morning, mam would go down to the Hill. It was a tough life to choose but, like so many people from that era, she was made of a certain metal,” she said.

She added: “She had an amazing sense of a humour, a big heart and an infectious laugh. She was incredibly independent and had a will of steel. They broke the mould when they made our mam, she leaves a great legacy behind.”

Tessie was born on Summerhill and moved with her family to Whitehall when she was five. They would walk to school on Rutland Street in the north inner city every morning and walk home, but after three years the family moved back to the city centre – first to Temple Street and then to Seán MacDermott Street before settling on Foley Street.

When she retired from the Hill 18 months ago, a special function was held in the Mansion House in her honour.