Vessel capsized during rescue off Libya

Number of fatalities not known, but 185 people were still unaccounted for last night 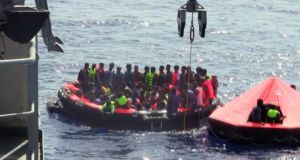 The capsize of a boat with more than 600 people on board just as LÉ Niamh inflatables were approaching it north of Libya is the worst single incident the Naval Service has responded to since Irish patrol ships were deployed to the area in May.

The LÉ Niamh, which took over from the LÉ Eithne in July in an effort to rescue migrants attempting to reach Europe from north Africa, had only just returned to the Libyan coast after its rescue last week of 453 people in two separate incidents and the discovery by its crew of 14 bodies below the deck of a converted fishing vessel on July 27th.

The 14 victims, all male, were believed to have died of overcrowding and asphyxiation within hours of leaving Libya. “Below deck” fares charged by traffickers are reputedly cheaper, with passengers under much greater risk in already overcrowded vessels.

Just a week before that, two of the medics on board the Niamh had delivered a baby girl, named Destiny, to a 23-year old Nigerian woman rescued from a migrants’ vessel.

There was no final figure last night for fatalities after yesterday’s capsize, but at least 185 people had not been accounted for.

The incident occurred as the two rigid inflatable boats (RIBs) from the patrol ship were approaching the fishing vessel and signalling to people to sit down until lifejackets could be distributed.

“The routine is that one RIB approaches on each side of the vessel, the signal is given to sit down and to stay sitting until everyone has a lifejacket on, as many of these people might never have been to sea before,” Capt Barry said.

“Whatever happened, a number rushed to one side, and it capsized and sank in a couple of minutes.”

The patrol ship launched its four liferafts, while the RIB crews distributed lifejackets to the hundreds of people in the water.

An Italian naval ship Sirio and two Médecins Sans Frontières (MSF) vessels steamed to the scene to assist. The Italian vessel Mimbelli sent a helicopter to the scene to deploy additional life rafts.

More than 2,000 people are known to have died trying to cross the Mediterranean this year, according to the International Organisation for Migration (IOM), and the increasingly desperate tactics used by traffickers in Libya means that this situation is set to continue, according to Mark Micallef, editor of the Malta-based Migrant Report non-profit project.

MSF said the 2,000 recorded deaths were all “preventable, at the hands of Fortress Europe” and its restrictive migration policy.

MSF director in Ireland Jane-Ann McKenna said that the loss of life highlighted the need for additional rescue resources in the Mediterranean, and an urgent need for EU member states to provide safe and legal ways for people fleeing conflict to seek asylum.

The Naval Service said that two members of its critical incident stress management team would meet the LÉ Niamh crew to provide counselling.

The crew of the Eithne received counselling after its tour of duty in the Mediterranean, where it rescued almost 3,400 people.