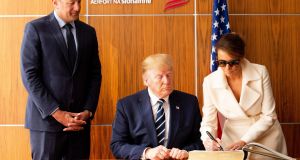 US president Donald Trump has told Co Clare TD and Minister of State Pat Breen that he will be returning to Ireland in the future.

Speaking after he met Mr Trump at Shannon Airport, Mr Breen said it had been a “colourful occasion”. Mr Breen was part of the welcome party that greeted Mr Trump as he alighted Air Force Two with first lady Melania Trump.

“Mr Trump looked very different from what the pictures show. In fact he is a fine looking man and very pleasant. We talked about the important role that the resort in Doonbeg plays in local economy,” Mr Breen said afterwards.

“He wrote ‘I Love Ireland’ in the visitors book then. He has a genuine interest in Ireland. He said he would be back again.”

Mrs Trump was taken to view an Irish cultural showcase in the airport while Mr Trump and Mr Varadkar held a bilateral meeting. Minister for Culture Josepha Madigan was involved in the event, which featured step dancing, Irish music and poetry.

Ms Madigan said she and Mrs Trump had a conversation about Irish culture. The Minister said Mrs Trump told her she was delighted to be in Ireland and the two spoke about the similarities between Ireland and her native Slovenia.

The two spoke about the popularity of step-dancing in Ireland and Mrs Trump said similiar performers had attended the White House.

During the event the two also had a discussion about their sons, with Ms Madigan telling the first lady that their boys were of a similiar age. Her son Daniel is about to sit the Junior Certificate and the two had a conversation about examinations, she said.

Ms Madigan also said they also spoke about the large number of US citizens who claim Irish citizenship, with Mrs Trump outlining the importance of the links between the two countries.

At the end of the event, Mrs Madigan and Mrs Trump met Mr Trump and Mr Varadkar before the US couple left for the president’s nearby Doonbeg resort by helicopter.

Mr Trump told the group once again that he was delighted to be in Ireland.

Ms Madigan said she believed the first lady enjoyed the performance as “her smiles said it all”.

“This Government places a high value on our national culture and heritage and is increasing investment significantly to help it flourish at home and around the world. So, it was great to get the opportunity today to share some of our beautiful music and dancing with first lady Melania Trump,” she said.