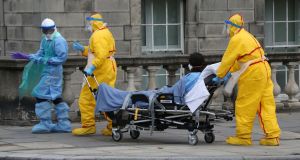 Hospital staff are in dispute with the HSE over a claimed failure to implement pay increases arising from a job evaluation scheme. Photograph: Colin Keegan/Collins Dublin.

Siptu has warned that up to 10,000 hospital workers could strike for a further five days this summer after an initial 24-hour strike scheduled for June 20th.

The strike by healthcare assistants and other grades within the health service was confirmed when the union issued strike notice on the HSE.

In a letter confirming the action, the union also warned that five further dates had been identified for more strike action if negotiations are not undertaken by the HSE.

The workers are in dispute with the HSE over a claimed failure to implement pay increases arising from a job evaluation scheme. The Department of Public Expenditure and Reform said in a statement that the matter has been referred to the Public Service Stability Agreement Oversight Group, “which is expected to meet shortly in relation to the matter”.

However, union leaders expressed skepticisim about the oversight group’s capaity to solve the issue. It is viewed, health division organiser Paul Bell said, as “code for a delay in addressing the substantial issue”. He said Siptu believes the government is “misusing” the body. He said the interactions he has had with the Department of Public Expenditure and Reform have been the worst he has experienced, even at the height of the economic crisis.

Siptu has said that it remains open to reasonable dialogue in a bid to avert strike action this month.

A spokeswoman for the Department of Public Expenditure and Reform confirmed that the oversight body will meet in advance of the strike date “to make every effort to avoid this dispute”.

A spokeswoman for the Department of Health said it is “disappointing” to hear of the strike. “As it is our priority to ensure that there is no interruption to health care provision for our service users, the HSE will consider any contingency planning required.”

Deputy general secretary for the public sector John King earlier called on Minister for Health Simon Harris and Minister for Finance Paschal Donohoe to step in and resolve the dispute.

“Failure to do this will undoubtedly bring pressures on the delivery of health services,” he said. “Our members accepted the provisions of all the public service agreements since 2010. The Government must now honour its obligations contained within these agreements. It is time to deliver for these workers. It is unacceptable that workers should be forced to go into an official dispute in order to get what they are owed.”

The workers are seeking pay increases adding up to about €20 million, breaking down to increases for the staff concerned ranging from €1,600 to €3,200 a year. Siptu has previously argued that a review of the work of healthcare assistants under schemes established by the Lansdowne Road agreement in 2015 had found they had been underpaid for a decade.

Siptu claims that those in the chef grades have co-operated with an independent review of their pay relationship with similar grades and “have had their hopes of achieving pay justice dashed”.

“The ball is now in the court of the Government. The Minister for Finance, Public Expenditure and Reform, Paschal Donohoe, has a small three week window to resolve this dispute or face the consequences.”

A ballot for strike action among members passed with 95 per cent support, the union said.

Fianna Fáil’s health spokesman Stephen Donnelly said it is “paramount” that strike action be avoided. “Already this year, we’ve seen 35,000 Irish nurses and midwives take industrial action and the effects of that left the entire hospital network reeling,” he said. “If the 10,000 health support staff go through with their strike action, 38 hospitals across Ireland will be under immense pressure to deliver services for their patients.”