Trump to raise concerns about Irish stance on Huawei with Varadkar

President Donald Trump and his wife Melania have been greeted by Taoiseach Leo Varadkar after landing at Shannon Airport. 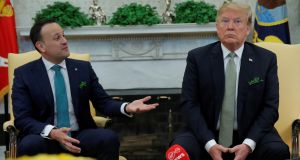 US president Donald Trump is expected to raise concerns about the Government’s stance on Chinese telecoms company Huawei when he meets Taoiseach Leo Varadkar today in Shannon, according to US sources.

The Chinese company has been at the centre of deepening tensions between Washington and Beijing, amid concerns that Huawei’s technology could be used by China to spy on sensitive data. Last month the United States effectively blacklisted Huawei, prompting Google to block the company from using its android apps on its devices.

Huawei is used by many of the main telecoms operators in Ireland, and the company is expected to be involved in the roll-out of Ireland’s next-generation 5G network. Ireland is of particular interest to the US, given the heavy presence of US multinationals here.

Huawei was one of the topics of discussion between Mr Trump and UK prime minister Theresa May in London on Tuesday. The US had warned Britain that it could limit intelligence sharing with its long-term ally if Britain allows Huawei to build some of its 5G network, though Mr Trump played down divisions between the two sides after the meeting.

The US government has previously raised concerns about the issue with the Department of Foreign Affairs. Democratic senator Chris Murphy also discussed the matter with Tánaiste Simon Coveney during a meeting in Dublin earlier this year. It is understood the Government is likely to consult further with the European Commission as it comes under pressure from Washington to reassess its relationship with Huawei.

While several countries including Australia, New Zealand and Japan, have banned the company from providing 5G equipment, the EU has stopped short of advising member states to break with the Chinese telecoms giant.

Mr Varadkar will meet Mr Trump at Shannon Airport on Wednesday afternoon on the first day of Mr Trump’s two-night visit to Ireland – his first since his election as president. Also on the agenda will be Brexit, as well as ongoing efforts to extend the E3 visa scheme – which is currently only available to Australians – to Irish citizens.

There was a heavy security presence in and around Mr Trump’s Doonbeg golf resort last night with hundreds of members of An Garda Síochána dispatched to West Clare to protect the US president and his entourage.

Garda checkpoints have been set up on all approach roads to the small village, up to 10 kilometres from Doonbeg. An exclusion zone will be set up around the Trump International Golf Links and Hotel resort today, with locals requiring special passes for their vehicles.

In a significant intervention on the eve of Mr Trump’s visit, President Michael D Higgins criticised the US president’s climate change policy as “regressive and pernicious”.

The speech was delivered at the 10th conference of the European Federation of Public Service Unions, held in the RDS, south Dublin yesterday .

“We must now plan for full decarbonisation of our European economies by 2050, encouraging the rest of the world to follow suit, and urging in the strongest possible terms the USA to re-consider its regressive and pernicious decision to leave the global Paris Agreement,” he said, a reference to the 2015 Paris accord which set targets for countries to reduce emissions.

Mr Higgins also noted in his speech that those at risk of exclusion from society were “being abandoned to become the prey of xenophobes, homophobes and racists”.