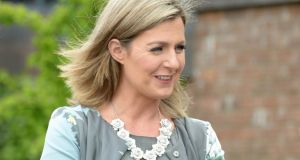 Maria Bailey told a Sunday newspaper she wanted to ‘draw a line in the sand’ on the issue, insisting that she had been hurt in the incident and left with €7,000 worth of medical bills. Photograph: Dara MacDónaill

Dún Laoghaire-Rathdown TD Ms Bailey brought the case after she fell off a swing in the Dean hotel in Dublin in 2015, claiming she suffered serious and lasting injuries.

Speaking at the reopening of the Curragh racecourse in Kildare, Mr Varadkar said he intended to speak with Bailey this week, and admitted that her case had been “an issue on the doors”.

Earlier, he had told RTÉ Radio: “I think in the first instance it is a private matter for her. It’s an incident that occurred before she was even elected to the Dáil, and isn’t something that the party has been involved in.”

A leading personal injury lawyer said that some people may be discouraged from bringing negligence cases in the wake of high-level public attention on cases such as the one taken by Ms Bailey.

Stuart Gilhooly, who is a former president of the Law Society and a member of the Personal Injuries Commission (PIC), said: “In the last six months, there’s a certain shame attached to bringing a claim.”

He added: “Because there’s been a focus on a minority of cases where there’s been no negligence or an element of exaggeration.” There was now “a very serious risk” of people not coming forward with cases.

“If you have a genuine case, you should never be concerned, so long as you don’t exaggerate,” said Mr Gilhooly, who is a partner with HJ Ward & Co solicitors.

While Ms Bailey was “unquestionably” entitled to bring her case, it was his opinion based on the information in the public domain that she would have struggled to win it, he said.

“On the facts that we know of, it would have been difficult to succeed,” he said, adding “we only know what was in the newspapers – [the case] wasn’t run in court.”

Speaking to the Sunday Independent, Ms Bailey said she wanted to “draw a line in the sand” on the issue, insisting that she had been hurt in the incident and left with €7,000 worth of medical bills.

Peter Boland, director of the Alliance for Insurance Reform, said that his members who deal with the public in the course of business “literally feel besieged by claimants”.

Mr Justice Nicholas Kearns, who is the chair of the Personal Injuries Commission, declined to comment when contacted by The Irish Times, as did Law Society president Ken Murphy.

Saying that she was “glad” that Ms Bailey has ended her legal case, Ms McGuinness said “repercussions” for the Dublin TD are unlikely: “I don’t think we’re going to do anything to Maria Bailey.

“I mean I think that in politics we all learn hard lessons on occasion. I’m more troubled by the businesses that are in confidence speaking to me but will not speak out because they are terrified that they will be forced to close if I put on the record what I am being told,” she said.