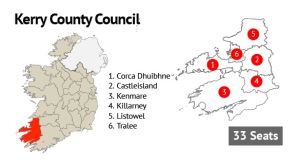 Three members of the Healy-Rae family were elected to Kerry County Council on the first counts in their respective electoral areas.

Jackie Healy-Rae (24), the son of TD Michael Healy-Rae, was elected on the first count, winning 2,621 first preferences in Castleisland.

Mr O’Connell was the only incumbent in the new four-seat electoral area to be returned. His party colleague and sitting councillor, Pat McCarthy was eliminated on the third count and Fianna Fáil’s Tom McEllistrim also lost his seat.

“But all I can say is that since I started canvassing five months ago I left no stone unturned and someone said to me last night, I might have even turned them twice.”

Mr McEllistrim blamed his disappointing showing on the redrawing of the boundaries. “You get days like this and I’ve been around politics long enough to know there are always swings and roundabouts and of course, the Mack will be back,” he said.

Maura Healy-Rae, the eldest daughter of the TD Danny Healy-Rae, was elected in the Killarney area. Ms Healy-Rae (28), a teacher at St Brogan’s College in Bandon, topped the poll with 3,099 first preferences, nearly twice the quota.

Meanwhile, the Mayor of Kerry, Norma Foley was re-elected, topping the poll in the Tralee electoral area with 2,106 votes, which exceeded the quota by 481.