‘Others could pull the plug on the government’, says Leo Varadkar 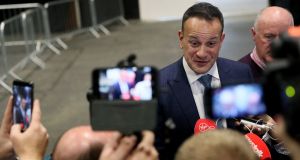 Leo Varadkar at the count centre in the RDS, Dublin. Photograph: Brian Lawless/PA

Taoiseach Leo Varadkar has said he cannot rule out an early general election but said he was not going to call one in the next couple of days or weeks.

Speaking on RTÉ’s Six One News from the RDS count centre he said: “If this was about maximising the prospect for my party Fine Gael, we would have gone to the country a year ago in the aftermath of the referendum when we were on 35 per cent in the polls.

“I have never put the party first when it comes to these issues: putting the country first, there are issues that we need to deal with,” he added.

“ Brexit, getting the broadband contract through, putting together a budget and of course there are by-elections. All those four factors and others are at play but I don’t intend to be calling into Áras an Úachtaráin in the next couple of days,” Mr Varadkar said.

However asked if he was ruling out an early general election, Mr Varadkar added: “I can’t rule it out. First of all it is not necessarily my decision. Others could pull the plug on the government.

“If I am the one to seek a dissolution, I have to bear in mind other factors. Not ruling but not a prospect in the next couple of days or weeks.”

Later, Mr Varadkar told reporters that Dáil arithmetic may dictate the timing of a general election.

“This is all about making sure that we have a functioning Government, so as long as the Government can function and function well, we can get our job done and get our agenda through, well then there is no need for an election but if that becomes a problem well then that changes things.

“I have been asked questions about when the Dáil is going to be dissolved for nearly two years now. At some point, someone is going to have to start believing me.

“My focus is on delivery, getting the job done, keeping the economy strong and making sure people have jobs to go, more delivery on housing and healthcare and implementing our climate action plan, that is our focus.”

On Saturday, Fianna Fáil leader Micheál Martin rejected any suggestion that he might withdraw from the confidence and supply agreement with Fine Gael and trigger a general election on foot of Fianna Fail’s solid showing in the local elections. He said he was fully committed to honouring the pledge he made before Christmas to continue with the deal in the face of a possible no-deal Brexit.

Mr Martin admitted that Fianna Fáil’s continued support for the minority Fine Gael administration had proved problematic on the doorstep with many voters urging the party to withdraw from confidence and supply deal but he believed they had done the right thing by continuing to honour it.

On Micheál Martin’s promise to underwrite the Government for one more budget, Mr Varadkar said:”I can only take him at his word and he has said that he will continue to honour the confidence and supply arrangement until Brexit is resolved but we also need to bear in mind the possibility that Brexit may not be resolved for a very long time. The next deadline is October 31st, who knows if there will be another one?”

Under the confidence and supply deal Fianna Fáil agrees to support the minority Fine Gael-led Government by supporting them or abstaining in Dáil votes. This allows the Government to get the annual budget through the Dáil and stay in power.

Meanwhile Fianna Fáil councillor and former cabinet minister Mary Hanafin has said the Government will have little choice but to call a general election this year rather than weaken its positions by allowing a series of potentially damaging by-elections to take place before going to the country next year.

“It has to be this year,” she told The Irish Times. “The Government does not have time on its hands because of four by-elections that will have to take place and why would its wait for those to happen with all the potential they will have for a protest vote that would weaken its position terribly.”

Ms Hanfin was elected on the first count in the Blackrock LEA of Dun Laoghaire Rathdown.