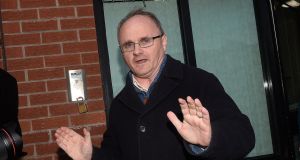 Sinn Féin MP Barry McElduff: posted a video on Twitter featuring him with a loaf of Kingsmill bread on his head. Photograph: Colm Lenaghan/Pacemaker Press

Taoiseach Leo Varadkar has suggested Sinn Féin MP Barry McElduff should be punished by his West Tyrone constituents for tweeting an “egregious” video on the anniversary of the Kingsmill massacre.

Sinn Féin announced on Monday that Mr McElduff had been suspended for three months for posting a video on Twitter featuring him with a loaf of Kingsmill bread on his head.

“I think what Mr McElduff did was very foolish, and very inappropriate, and very hurtful to the families of the people who were killed in that awful atrocity,” Mr Varadkar said on Wednesday.

The tweet was put online last Friday on the day of the 42nd anniversary of the Kingsmill massacre, in which the IRA killed 10 Protestant textile workers in south Armagh.

“Obviously it’s up to Sinn Féin to decide how they discipline their own members, and given his previous content on social media I think perhaps it was a genuine error of judgment rather than an attempt to deliberately insult the families of the victims,” Mr Varadkar said.

Meanwhile, the House of Commons parliamentary commissioner for standards, Kathryn Hudson, is to investigate a complaint about Mr McElduff.

Ms Hudson has received a written complaint about the tweet. Her investigation, however, is unlikely to begin before the PSNI, which also received complaints, has finished its inquiries.

DUP leader Arlene Foster said what she described as Sinn Féin’s continued “eulogising” of the IRA was hampering efforts to build a shared community in Northern Ireland.

“They have to stop eulogising terrorists,” she said on Wednesday after meeting the new Northern Secretary Karen Bradley.

“They have to stop that, it cannot continue. If we are building a new shared future for the people of Northern Ireland, let’s build it, but let’s move away from the past and move away from the eulogising of terrorists,” she added.

Ms Foster was again dismissive of the suspension of three months imposed on Mr McElduff.

“It really is time for Sinn Féin to show respect for all of the people of Northern Ireland. It is time for them to understand the hurt they have caused, not just over the incident with Barry McElduff but over a whole range of incidents in relation to innocent victims,” she said.

Ulster Unionist Party leader Robin Swann, after his meeting with Ms Bradley, said that in the wake of the controversy, Sinn Féin’s abstentionist MPs should no longer be entitled to take expenses from Westminster.

Colin Worton, whose brother Kenneth was one of the victims at Kingsmill, said his mother was getting abusive “sickening” phone calls about what had happened.

“They were ringing her up and they were asking did she have any Kingsmill bread ... a woman in her 90s,” he told the Today with Sean O’Rourke programme on RTÉ.

“She is the sort of woman ... She would live with and try and get through it, but it was very hurtful to hear that some uneducated person for whatever means is ringing up a great, great, great-grandmother, a 90-year-old lady, the head of five generations, for to try and make her feel bad.”

Mr Worton said his 24-year-old brother was shot in the face and unrecognisable after the attack. “How does that affect someone at 15?” he said. “I lost all my education at 15 because my world, it just slipped away. I was totally ruined.”

Mr McElduff has apologised for the hurt caused but insisted he had not intended to cause offence. Sinn Féin deputy leader Mary Lou McDonald described the tweet as “crass, stupid and obnoxious”.