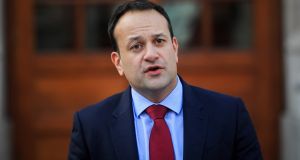 Taoiseach Leo Varadkar stressed that there would be a free vote on the issue. Photograph: Gareth Chaney/Collins

The Government will press ahead with preparing legislation to allow abortion on request up to 12 weeks of pregnancy despite concerns expressed by Taoiseach Leo Varadkar that it may be “a step too far” for the majority of the public.

A number of Ministers have also expressed doubt that the public will support legislation giving effect to the recommendations of the Oireachtas Committee on the Eighth Amendment.

Minister for Finance Paschal Donohoe and Minister for Rural and Community Development Michael Ring were among those who expressed doubt at yesterday’s Cabinet meeting that such an abortion regime would be accepted.

Both Ministers, however, told their colleagues they supported the Oireachtas committee recommendation allowing for abortion on request up to 12 weeks of pregnancy.

Mr Donohoe is understood to have told the Cabinet that Ministers had thus far been able to examine the committee’s report in a calm environment, which may not be the case during a referendum campaign.

Minister for Social Protection Regina Doherty was understood to have expressed similar reservations.

Sources said only one person - Chief Whip Joe McHugh - told the Cabinet yesterday he could not support a system that would allow abortion up to 12 weeks. Some others Ministers were non-commital.

The Taoiseach stressed that there would be a free vote on the issue in Fine Gael and TDs and Ministers would be free to campaign against the measure if they wished.

Paul Kehoe, Minister of State at the Department of Defence, is understood to have highlighted his Catholic faith, while acknowledging that the availability of abortion pills over the internet had become an issue

Both Mr Kehoe and Minister for Business Heather Humphreys said they had been lobbied heavily by Fine Gael members on the issue.

Mr Varadkar did not express a view at Cabinet but said the Government had three options: do nothing, follow the Oireachtas committee’s report or suggest an alternative proposal. Ministers suggested the last option would present difficulties because it would have to be explained why a new option was better than the committee’s proposals.

Numerous Fine Gael Ministers referenced the difficulties in the party during the debate over the Protection of Life During Pregnancy Bill, which saw three TDs and one senator leave the party in the last Dáil.

Independent TD and Minister of State Finian McGrath said attention must be paid to the disability element to the debate, while Minister for Transport Shane Ross suggested no legislation on abortion should proposed until after a referendum to repeal the eighth amendment is passed.

Ministers were told that a referendum could be held in late May or early June.

Speaking after the meeting, the Taoiseach said the committee recommendations went further than many people, himself included, had expected.

“There is a concern understandably among many politicians that perhaps for the majority of the public that proposal might go one step too far. But then again, perhaps not,” Mr Varadkar said.

“That’s the debate we’re going to have over the next few months.”

The Government will continue to prepare legislation along the lines of the committee recommendations, with the intention of publishing the heads of a Bill to allow abortion — which would include a summary of the Bill’s intentions – before any referendum. No other legislative proposals on abortion are being prepared.

However, the Bill could only be tabled in the Dáil if a referendum to delete or replace the constitutional ban on abortion – article 40.3.3, which guarantees the equal life of the mother and the unborn child – were successful.

Minister for Health Simon Harris, during a lengthy briefing at Wednesday’s meeting, told his Cabinet colleagues that he expected to be in a position within three or four weeks to seek their formal agreement to hold a pre-summer referendum.

The Dáil will debate the Committee’s report for three days next week, which will be preceded by a special meeting of the Fine Gael parliamentary party next Monday.

Labour leader Brendan Howlin urged Mr Varadkar to bring the proposal to hold a referendum to the Dáil as soon as possible.

However, the Pro-Life Campaign criticised the moves towards a referendum.

“It’s very clear that some members of the Government are determined to keep the time frame as tight as possible to deny the public an opportunity to scrutinise closely the proposal that will be put to the people,” spokeswoman Cora Sherlock said.

Ms Sherlock also criticised the committee’s recommendations. “The Oireachtas Committee recommendations are exclusively focused on taking away all meaningful protections from unborn babies,” she said.