‘I consider myself to be pro-life in that I accept that the unborn child is a human life with rights,’ Taoiseach told Dáil in 2014, but also said Eighth Amendment was ‘too restrictive’ 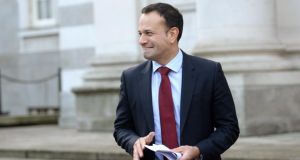 Taoiseach Leo Varadkar: indicated before Christmas in a briefing with journalists that his views on abortion had evolved. Photograph: Dara Mac Dónaill

Taoiseach Leo Varadkar on Wednesday again declined to give his views on the report of the Oireachtas Committee on the Eighth Amendment, which has recommended legislating for abortion on request up to 12 weeks. However, several Fine Gael sources, including some who have discussed the issue with the Taoiseach, expect that he will back the proposals, joining the seven cabinet ministers who have so far expressed their support.

Mr Varadkar is already on record as believing that Ireland’s abortion laws, underpinned by the Eighth Amendment, are too restrictive. However, he has avoided giving his views on the recommendations of the committee, saying instead that he would read the report, listen to the Fine Gael parliamentary party’s views and then make his position known. But those with a good claim to know the Taoiseach’s mind on the subject say they would be astonished if he did not back the Committee’s report, including the recommendation for abortion on request up to 12 weeks.

“I think he changed on this ages ago,” said one source who knows him well. “He’ll be fine with it,” said another. Several sources said that if the Taoiseach was not going to back the proposal, it wouldn’t have got this far.

Mr Varadkar indicated before Christmas in a briefing with journalists that his views on abortion had evolved. If so, like many people in Fine Gael, they have evolved from what was a strong anti-abortion position. In several debates on the issue during the last Dáil – on repeated Private Members’ Bills – Mr Varadkar made his views clear. Speaking in 2014, he said: “Ministers for health do not just represent their own private views, they are guardians of the nation’s healthcare, and must work to protect and safeguard all of its citizens.

“But perhaps people may be interested in where I am coming from.

“I consider myself to be pro-life in that I accept that the unborn child is a human life with rights. I cannot, therefore, accept the view that it is a simple matter of choice. There are two lives involved in any pregnancy. For that reason, like most people in the country, I do not support abortion on request or on demand.”

However, Mr Varadkar also made clear that he was in favour of changing the Eighth Amendment.

“Speaking as minister for health, and also as a medical doctor, and knowing now all that I do now, it is my considered view that the Eighth Amendment is too restrictive,” he said.

The following year, speaking on another Dáil motion, Mr Varadkar said that he had repeatedly given his views to the Dáil.

“I consider myself to be pro-life, I accept that the unborn is a human life with rights and I do not support abortion on request or demand. I also stated, and sincerely believe, that this is an issue on which there are few certainties and on which families and doctors often find themselves having to make extremely difficult ethical and clinical decisions.

“As members might recall, because of my experience as a doctor and, in the recent past, as minister for health, I have come to the conclusion that the Eighth Amendment is too restrictive, as it has no regard for the long-term health of the mother. It also forces mothers and their partners to bring to term children who have no chance of survival outside the womb or for long afterwards. However, just as on the last two occasions, I cannot support this legislative proposal, which affords neither protection nor rights to the unborn.”

If Mr Varadkar backs abortion on request up to 12 weeks, he is likely to be pilloried by anti-abortion campaigners

As late as last summer, Mr Varadkar told The New York Times in an interview that he believed that the unborn child had rights.

“As a doctor, I would perform pregnancy scans,” he said, “and while I don’t accept the view that the unborn child, the foetus, if you prefer that term, should have equal rights to an adult woman, to the mother, I don’t share this view that the baby in the womb, the foetus, whatever term you want to use, should have no rights at all.

“And there are people who take the view that human rights only begin after you’re born and that a child in the womb with a beating heart, the ability to hear, the ability to feel pain, should have no rights whatsoever. I don’t agree with that.”

If Mr Varadkar backs abortion on request up to 12 weeks – as many of his colleagues expect – he is likely to be pilloried by anti-abortion campaigners. Pro-choice campaigners, however, are likely to hail them as evidence of how the country is changing on the abortion issue. Either way, the Taoiseach’s position will be central to the debates to come.