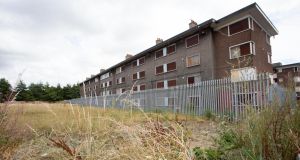 Dublin businesses face a rates increase of 5 per cent in 2020, one of the largest rates hikes ever imposed by the city council, if the Government does not pay the council €8.4 million “owed” on Irish Water properties.

Councillors last Monday refused to pass the city’s 2020 budget because of the loss of funds relating to Irish Water.

Commercial rates on properties in the city owned by Irish Water amount to €23.6 million, but the Government has decided to take €8.4 million away to give to other local authorities.

Council chief executive Owen Keegan said the council was not being compensated by central Government despite prior assurances to the contrary. As a result of what he described as “inadequacies” in funding from central Government, he asked councillors to increase parking charges, tolls and social housing rents, and impose cuts to community grants.

Mr Keegan had also proposed a rates increase of 1.5 per cent for all businesses in the city, a higher sum than generally sought in rates, which in many years have remained static or been cut.

However, the parties which make up the largest voting block on the council – Fianna Fáil, the Green Party, Labour and the Social Democrats – on Monday night propose to increase rates by an unprecedented 5 per cent, to save the funding for community schemes.

The parties wrote to Minister for Housing Eoghan Murphy, Minister for Finance Paschal Donohoe and Taoiseach Leo Varadkar following last Monday’s meeting to seek the €8.4 million in funding. “We told them we want the money they owe us, but we haven’t had any response,” Labour councillor Dermot Lacey said.

On Tuesday Minister of State for Housing Damien English said his department was willing to enter talks on the city’s budget. On Friday evening a spokesman for the department said no meeting had been requested by the councillors.

If the sale of the land to Bartra is allowed, it is going ahead on a very dubious legal basis

Three weeks ago Dublin city councillors approved by 39 votes to 18 a plan which would see more than 800 new homes on the site of the former flat complex close to the Phoenix Park.

However, Independent councillor John Lyons said while the councillors voted on housing chief Brendan Kenny’s proposal for the site, they did not vote on the disposal of the land to Bartra.

The webcast of the meeting appears to indicate the council had not reached the report in relation to the disposal of land, which was drafted by the head of planning Richard Shakespeare, when the meeting was disbanded due to protesters invading the floor of the council chamber.

“The vote wasn’t legitimate, we voted on the report, not on the disposal, which means if the sale of the land to Bartra is allowed, it is going ahead on a very dubious legal basis.”

However, the council disputes this version of events.

“The vote on O’Devaney Gardens was correctly taken at the November meeting and this will be reflected in the minutes of the December meeting,” a spokeswoman said. She said the vote that was taken was in relation to the disposal.

Several groups on the council are attempting to stop the redevelopment of the former council flat complex with 50 per cent private, 30 per cent social and 20 per cent affordable purchase housing. Bartra has offered to sell a percentage of the homes to the council or a nominated housing body for use for affordable rental.

A special meeting to discuss O’Devaney Gardens, requested by Sinn Féin and a number of Independent councillors, will be held after the budget meeting.