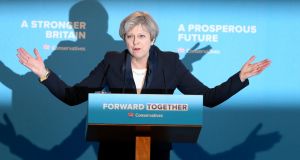 Theresa May has turned her back on Margaret Thatcher’s free market economics with a Conservative manifesto aimed at capturing Labour and Ukip voters. The prime minister promised to cap energy prices, curb foreign takeovers of parts of the British economy and oblige companies to appoint workers’ representatives to their boards.

She tore up promises made by David Cameron to protect the value of pensions and announced that the winter fuel allowance for the elderly would be means tested. People with property worth more than £100,000 (€117,000) will have to pay for their care in old age, although they will not lose their home before they die.

“People are rightly sceptical of politicians who claim to have easy answers to deeply complex problems,” Ms May said.

“It is the responsibility of leaders to be straight with people about the challenges ahead and the hard work required to overcome them.”

Signalling a change of direction for the Conservatives, the manifesto rejects “untrammelled free markets” and “the cult of selfish individualism”. It restates May’s commitment to a hard Brexit, promising to leave the single market and the customs union, adding that no deal would be better than a bad deal.

Ms May remains committed to bringing annual net immigration below 100,000, a seven-year-old target which has never been reached. She declined to say when she expected to reach the target but suggested that numbers from the EU would fall after Brexit.

“What we will be able to do when we leave the EU is, of course, bring in rules and controls for people coming from those remaining countries in the European Union into the UK, which we haven’t been able to do as a member of the EU. I also want to ensure that people here in this country are able to get on regardless of where they come from, or which school they went to, that what we see here in the UK is that how far you go depends on your talents and your willingness to work hard,” she said.

German chancellor Angela Merkel warned on Thursday that any move by Britain to sharply restrict immigration from the EU after Brexit would be met with retaliation.

“This is not meant maliciously, but you cannot have all of the good things and then say there’s a limit of 100,000 or 200,000 EU citizens allowed to enter the UK. That won’t work. At that point, we’ll have to think about which restrictions we make on the European side to compensate for that,” she said.

“She is hitting older people with a classic Nasty Party triple whammy: scrapping the triple lock on pensions, removing the winter fuel allowance and forcing those who need social care to pay for it with their homes. The Conservatives’ record is one of broken promises and failure,” he said.

Although new polls on Thursday showed Labour recovering, the Conservatives still enjoy a comfortable, double-digit lead. The prime minister’s embrace of state intervention in the economy and the taxation of wealth could broaden her party’s appeal but she insisted that she was not creating a new ideology.

“There is no Mayism. There is good solid Conservatism that puts the interests of the country and the interests of ordinary working people at the heart of everything we do in government,” she said.