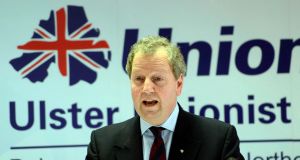 Danny Kinahan: his unseating of DUP stalwart Rev William McCrea by 949 votes was one of the big stories of the 2015 general election. Photograph: Colm Lenaghan/Pacemaker Press

The battle for the South Antrim Westminster seat is a two-horse race between the UUP and DUP in a constituency which voted in favour of Brexit last year.

Danny Kinahan’s unseating of DUP stalwart Rev William McCrea by 949 votes was one of the big stories of the 2015 general election, and marked the UUP’s return to the green benches of the House of Commons for the first time in over a decade.

Kinahan’s party colleague Tom Elliott brought UUP representation to two seats when a unionist pact in Fermanagh-South Tyrone saw Sinn Féin’s Michelle Gildernew lose her seat by 530 votes. Both UUP incumbents know they are in for a long night after votes are cast on June 8th, and Kinahan is not taking the electorate for granted.

This time he is up against “good friend” DUP MLA Paul Girvan, and knows re-election will be tough. “It’s going to be very, very close,” Kinahan said.

He is concerned about voter apathy, and wants the electorate to be aware of his achievements over the last two years. On top of constituency work he set up an all-party group to explore strengthening Northern Ireland’s union with Britain; focused on increasing links between Westminster and Stormont in areas such as education and business; and advocated for a military covenant to provide aftercare for veterans which political opponents view as preferential treatment for the British armed forces.

The DUP campaigned for Brexit, while the UUP campaigned to Remain. However, Kinahan went on to vote with the Conservative government to trigger article 50, and says he is firmly behind securing the best deal for the North as Brexit negotiations progress.

The ex-soldier said when British prime minister Theresa May spoke of a “red, white and blue Brexit” he as a unionist “loved the idea” but made clear that for Northern Ireland “it is very much green and orange”.

“People wanted change but they want me to manage that change so Northern Ireland gets the best. I am there for absolutely everybody.”

The constituency is a mix of urban and rural areas, including Antrim, Ballyclare and Templepatrick, where Belfast International Airport is a major employer.

In 2015, Templepatrick-based Kinahan made much of “living on the patch” unlike McCrea, but Girvan from Ballynure is also local, well-liked and has a strong personal vote.

Girvan was a long-serving DUP councillor and Newtownabbey mayor, and has been an MLA since 2010. He has previously served as the private secretary to the former Office of the First Minister and Deputy First Minister; and was a chair of the Finance and Personnel committee; and a member of the Public Accounts Committee.

DUP leader Arlene Foster describes him as “hard working, with a love for the area and a track record for delivery that is second to none”.

“Unionists in South Antrim know it is the DUP that is best placed to strengthen Northern Ireland interests in parliament, and that Paul is someone who will always be on their side,” Ms Foster said.

Losing South Antrim was bruising for the DUP but it justified in being confident about winning it back. If recent voting patterns in Assembly elections are replicated, it is favourite to edge the result with its candidate.

The DUP outpolled the UUP at the Assembly elections in 2016 and 2017, where its candidates were about 5,400 votes ahead of their unionist rivals.

Next month the UUP will need Alliance and SDLP voters to turn out for it in significant numbers. Some of that potential vote may have been alienated as Kinahan has been so vocal about protecting British soldiers accused of conflict-related violence from prosecution.

Sinn Féin’s national chairman Declan Kearney MLA and Alliance councillor Neil Kelly are back on the ballot, but it very much a battle between Kinahan and Girvan, with the latter seeming likely to shade it.