Up to 92,000 boom-era apartments may have defects, committee hears 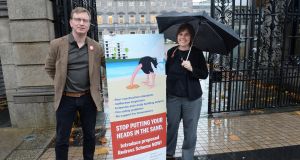 Up to 92,000 Celtic Tiger-era apartments may be affected by building defects, including fire safety issues, an Oireachtas committee has heard.

The housing committee heard on Thursday from the Construction Defects Alliance (CDA), a group which has come together to represent the interests of the owners of affected apartments.

Kath Cottier, who is chair of the organisation and also director of housing services with the Clúid housing agency, told the committee that “almost 92,000 apartments” may be affected by defects.

The figure of 92,000 is based on work done by Keenan Property Management (KPM), one of the largest management companies in the state. KPM have previously told The Irish Times it believes between 70 and 80 per cent of the apartment housing stock are affected by legacy issues.

The alliance said that given 131,000 apartments were built during the Celtic Tiger, some 92,000 units could be affected.

Des McCabe, of the Apartment Owners Network, told the committee he believed this was a “realistic estimate and probably will go higher when it all flushes through”.

Ms Cottier said that because of the impact on property values, remediation costs and difficulty in selling their homes, many homeowners “simply don’t want to know if their apartments or houses are affected by fire or other defects.

“But from a health and safety point of view this is an appalling vista - we can’t continue with a hear no evil, see no evil approach to the issue of fire and other defects. We don’t even have to mention Grenfell Tower to see where that road leads to,” she said.

Ms Cottier told the committee she knew of many apartment developments where issues have yet to become public. In the development where she owns a unit, Beacon South Quarter in Sandyford, residents have been asked to pay €13,500 per unit. In another unit which she declined to name, owners were told they had three months to find €16,500 to fund repairs, to be paid in one lump sum.

The committee heard of the extreme stress and worry the owners of affected apartments have had to endure. Ms Cottier said the issue of remedying defects is overwhelming residents, owners and owners management companies, the corporate entities composed of owners who are responsible for running apartment blocks.

The need to fund works “places huge strains on owners who have to find the resources to pay the levies in addition to all of their other costs”, she said.

Andrew Prior, who also owns an apartment in Beacon South Quarter, said he has paid between €220 and €250 per month for the last 30 months to fund repairs. “It’s a hardship, but I can afford it. I know there’s families there who can’t afford it, and can’t pay. Not won’t, can’t,” he told the committee. “Someone deliberately chose not to put fire stopping in the wall outside my apartment… that individual is probably still working in the construction industry right now.”

Matt Cleary, whose firm Bohan Hyland manages more than 80 housing developments around the country, said he was “deeply frustrated at the lack of financial support” available to residents. Once a defect is discovered, he said, the financial impact was immediate.

“Instantly the insurance premium is doubled, and you’re lucky to keep your premium at all,” he said. Then fire consultants and surveyors must be employed to identify the scale of a problem, before levies are even agreed to fund remedial works.

Sinn Féin housing spokesman Eoin Ó Broin, said building control laws introduced in the 1990s were “deliberately designed in such a way that the state had no legal liability and the industry would be trusted to do the right thing”.

Therefore, the state’s obligation to get involved in a private matter may be limited. Mr Ó Broin called for a new body to be created along the lines of the Residential Tenancies Board (RTB), to give legal, free advice to homeowners and provide a mediation service between developers and property owners.

Green Party deputy leader Catherine Martin told the committee that “we would not tolerate this in the food industry or road safety, and I do not know why we tolerate it in our homes”.

Fianna Fáil housing spokesman Daragh O’Brien called for the introduction of low cost home improvement loans for remediation, and a potential levy on the construction and insurance sector.

Committee chair Noel Rock TD said he would write to Minister for Housing Eoghan Murphy to arrange a meeting between him and the apartment owners group. He said a “cohesive solution” was needed to the issue, rather than the ad hoc way it has been approached in recent years.