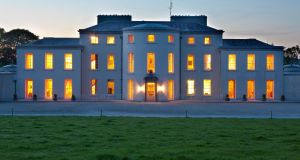 In Co Waterford, €3.7m was approved for the Mount Congreve Estate.

Government approval of €16.3 million in funding for four projects designed to develop rural tourism has been welcomed by Fáilte Ireland.

The funds were approved under a specific Department for Rural and Community Development programme targeting regional development. Orla Carroll, director of product development with Fáilte Ireland, said the decision was a “huge vote of confidence by the Government in tourism’s ability to drive economic growth in rural communities across Ireland”.

Two of the projects are being co-funded by Fáilte Ireland, which partnered with Wexford County Council and Waterford City and County Councils on the schemes.

The New Ross Tourism Transformation project aims to create a visitor attraction telling the story of Norman Wexford, and a second attraction at Dunbrody Famine Ship. It was awarded €5.5 million by the department under the Rural Regeneration and Development Fund (RRDF).

In Co Waterford, €3.7 million was approved for the Mount Congreve Estate, which is aiming to create “one of the great gardens of the world”. Ms Carroll said the projects would deliver significant growth in visitor numbers, revenue and job creation.

In addition to the two Fáilte Ireland-backed projects, the remaining €7 million allocated to tourism-related schemes will be shared between projects in counties Mayo and Kildare. The 46km Barrow Blueway, along the Grand Canal/Barrow line, as well as the Clew Bay Greenway Project in Co Mayo, have both been afforded funding.

The combined cost of all four projects is €25.2 million, with the difference between the funding from the exchequer being made up by Fáilte Ireland and local authorities. In all, the Government approved €62 million across 26 projects through the RRDF. That funding will be matched by a further €33 million from other State-funded bodies, bringing the total package to about €95 million.

In addition to the tourism-focused projects, other schemes that received funding focused on the regeneration of regional towns. In Co Cavan, funding was made available for the Virginia Civic Centre, while in Co Donegal, there will be support for a tourism information centre and a digital hub in Killybegs.

Michael Ring, the Minister for Rural and Community Development, said it was “vital that we continue to build resilience in rural communities and make our towns and villages vibrant places for families to live. The projects that this fund supports are targeting areas where they can have the greatest economic and social impact and will help support communities in facing the uncertainty still posed by Brexit.”

1 Aaron Brady, the man who said with pride he was a cop killer
2 A chronicle of dignity and despair
3 Aaron Brady found guilty of capital murder of Det Garda Adrian Donohoe
4 Case of Covid-19 confirmed at community creche on UCD campus
5 Make a Day of It: Get back into your favourite city centre, Dubs urged
Real news has value SUBSCRIBE