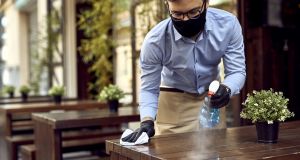 The Irish Congress of Trade Unions says it is concerned ‘some of the proposed changes will further undermine the position of migrant workers in Ireland’. File photograph: iStock

Shortages of lower-skilled workers and subsequent pressure on wages have the potential to be as harmful to the Irish economy as a shortage of skilled labour, employers have said.

However, trade unions have argued that the Government should not proceed with planned reforms to legislation governing work permits until the end of the pandemic, when a clearer picture emerges in relation to the number of workers who are unemployed.

Employers have urged the Government to consider special visa arrangements for lower-skilled general operatives, as exist in Canada or New Zealand.

Unions contend that planned Government reforms seemed to address the needs of employers only and that there are no proposals envisaged “to enhance and protect migrant workers themselves or to ensure that they are guaranteed their employment rights while working here”.

Unions and employer representatives will address the Oireachtas Joint Committee on Enterprise and Employment on planned new legislation on work permits today.

The proposed reforms would allow, among others, for the introduction of a new seasonal work permit as well as changes to the labour market needs test that applies prior to employers bringing in staff on work permits from abroad.

The Irish Business and Employers’ Confederation (Ibec) told the Oireachtas committee in an opening statement submitted ahead of the hearing, that “new ways to attract migrants must be undertaken to meet the labour market needs that extend beyond our own capacity”.

It said that “given the fast-paced, changing global business model, education and training cannot meet all demands in real time”.

Ibec said that the planned new legislation did not directly tackle the issue of the low and unskilled workers, who were also needed to support the maintenance and growth of industry in certain sectors.

“Shortages among lower-skilled workers and subsequent pressure on wages have the potential to be as harmful to the Irish economy as a shortage of skilled labour.

“This is particularly for indigenous businesses which are predominantly based in sectors that use a higher proportion of low-skill labour, such as care, manufacturing and agri-food.

“The absence of this category of workers is not being addressed by the pool of resident workers and these sectors are not in a position to compete with higher-paying sectors due to their low margins. Failing to resolve this crisis is likely to endanger existing business and limit the ability of organisations to to take on new business opportunities internationally.

“Longer term, this will also impact their ability to meet department targets set for certain sectors, [for example,] Food Wise 2025.”

Ibec said many of these workers in the care or food-processing sectors “remain on the ineligible list, thus stunting the ability of businesses to meet existing needs, let alone grow”.

“This is also impacting workforce development too, as some employers struggle to staff a shift let alone release people for learning and development. Given our commitments to lifelong learning as a way to remain competitive, this is a worrying trend.”

The Irish Congress of Trade Unions said in its statement it was concerned “some of the proposed changes will further undermine the position of migrant workers in Ireland”.

“The legislation proposes to introduce a seasonal work permit. We regard this as being particularly problematic. The problem that arises is ensuring that workers employed on such permits have the appropriate terms and conditions of employment.

“However, because the work permit will be issued for a short period of time, the difficulties of enforcement multiply and the difficulties for workers to secure redress increases exponentially.

“It is argued that Ireland is an ‘outlier’ in the European Union by not having seasonal work permits. If alignment with other European countries is to take place, it must be a genuine alignment. This involves aligning all labour standards, including the right to collective bargaining.”

It said a fundamental plank of the country’s labour market policy was that where employment vacancies arose, they should be advertised domestically in the first instance and then in the EU and EEA.

“It is only when vacancies cannot be filled from these sources, [that] a work permit [can] be sought. The changes proposed [to restructure the labour market needs test] have the potential to severely undermine this important labour market regulation.”