Universities do not exist ‘to produce students who are useful’, President says 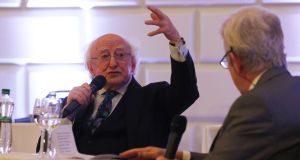 President Michael D. Higgins has warned that the capacity of universities to provide a “moral space” for discussion is being eroded at a time of growing political populism.

Mr Higgins, who was opening a celebration of Trinity College Dublin’s College Historical Debating Society, said “universities are not there merely to produce students who are useful”.

“They are there to produce citizens who are respectful of the rights of others to participate and also to be able to participate fully, drawing on a wide range of scholarship,” he said on Monday night.

The President said there is a growing cohort of people who are alienated and “who feel they have lost their attachment to society and decision making”.

He explicitly targeted US president Donald Trump’s political sloganeering, saying these alienated voters “can become available for others who come and say to them ‘I want to be your voice’.”

“This is the background to ‘Make America Great Again’, that nonsense - that’s all it is. [It is] just a wild shout. But it is exploitative of an alienated group.”

Mr Higgins said universities are relied upon “to create that moral space where people will be able to evaluate different suggestions”.

Asked by his interviewer, the broadcaster and historian John Bowman, if he feared that capacity was being eroded, the President said “I do, straight up”.

“We have a fractured society and the university is the place to where you would go for putting things back together in relation to discursive options,” he told a crowd assembled in Trinity’s Examinations Hall.

He said universities and academics had become overly focused on the market, because of a sense that there was “magic happening in the marketplace… when in fact actually what you had was a whole series of vulgar chancers”.

The College Historical Society, or “the Hist”, claims to be the world’s oldest undergraduate society and is running a week-long series of events to mark its 250th anniversary.

Recalling his debating days in university, the President said debating is “a life-changing experience, most people who have done it will remember the very first time they debated and the sensation it caused”.