Two charities for blind and visually impaired to merge 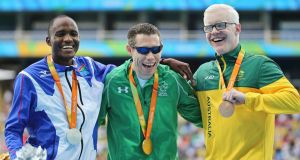 The National Council for the Blind of Ireland (NCBI) has announced plans to merge with Vision Sports Ireland, which provides services to sight-impaired athletes.

The merger is to be formally announced in Dublin on Tuesday .

The two organisations will now offer a range of improved services to each others’ clients, with those supported by the NCBI now availing of the range of sports and training facilities offered by Vision Sports.

The charity is primarily funded by Sports Ireland but relies on its own network of volunteers to assist run its key events such as May Fest and Inclusion Games.

Derry-based paralympian Jason Smyth who is a board member of Vision Sports said the organisation had continuously encouraged and supported him as an athlete.

Smyth who has won five gold medals including the 100 metre final at the 2016 paralymics, said the organisation gave people who were blind or visually impaired “the confidence to try something new.

“To know more blind or visually impaired people could benefit from their work through this merger is really heartening for me,” he said.

Vision Sports clients will now be able to avail of emotional supports, assistive technology, library services and rehabilitation training offered by the NCBI.

The NCBI offers counselling for people struggling to come to terms with sight loss as well as rehabilitation training, including independence and mobility training.

In addition NCBI offers “low vision solutions”, such as magnifiers and other aids, to help people to read standard print. It also offers assistive technology advice and training to either magnify or read aloud what is on screen.

It runs a library with large-print and audio books, and gives employment advice.

As a charity, NCBI raises €3 million annually to keep operating at current levels. Its ceo Chris White said the merger “is a really progressive step for NCBI as it will mean greater participation by people who are blind or visually impaired in such activities across the country. This in turn will create a positive health impact and social benefits for the participants”.

For the immediate future the merged organisations will continue to use their own names while being part of the larger entity.