There will be no public service ‘peace clause’ if current deal not replaced, says Fórsa 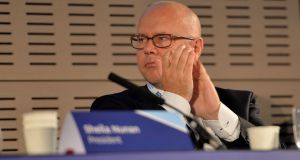 Kevin Callinan says there is now a real possibility that there will be no agreement at the end of the year. Photograph: Alan Betson

If there is no new public service pay deal reached and put out to ballot before Christmas, various groups will begin to move away from a negotiated process, the head of the largest union representing State employees has said.

Kevin Callinan, general secretary of Fórsa and chairman of the public services committee of the Irish Congress of Trade Unions, said that in such a scenario various groups would begin formulating their own pay claims and looking at other strategies.

The current public service pay accord expires at the end of the year. In recent days exploratory talks aimed at looking at the potential for a successor deal hit an obstacle after unions complained the Government side had deferred scheduled talks.

Unions said a planned meeting with the Department of Public Expenditure last week had been postponed because officials had yet to consult the Minister for Public Expenditure and Reform, Michael McGrath, to establish the basis for any negotiations.

Unions said they met the Minister on July 28th and officials on September 8th and 22nd. However, they said they were contacted early last week to say the next scheduled round of talks could not go ahead as officials would not be able to brief the Minister until some stage in the coming week.

“The delay sends a signal that should be a cause of concern to all parties, including the Government. There is now a real possibility that we will find ourselves, perhaps unintentionally, without an agreement at the end of the year,” Mr Callinan said.

He said that without a new deal, there would be no “peace clause” applying to industrial relations in the public service.

“If proposals are not agreed, put to ballot and an outcome known or a process in train, there will be a shift away from negotiations towards the formulation of claims and other strategies.”

He said in such a scenario there would be no dispute resolution mechanisms and the only restrictions in place would be industrial relations legislation and the rule books of trade unions.

“The absence of an agreement would make for a very difficult industrial relations environment, which would itself be complicated further by the lingering Covid crisis. I don’t believe that’s in anybody’s best interests,” he said

Mr Callinan said in preliminary discussions the Government side had indicated they wanted a pay pause of an unspecified duration as part of any new accord.

He said Government officials had also suggested that an agreement of shorter duration than was customary over recent years – about three years – might be more appropriate. There was no agreement on these issues.

Mr Callinan said unions believed the basis of negotiations for a new public service agreement would “need to address specific austerity measures, include an acceptable approach to pay, and provide a clear path to resolving particular long-standing issues within public service grades, groups and categories, ensuring an ultimate resolution in each case”.

These priorities had been outlined to the Department of Public Expenditure by the trade unions as the basic requirements of any negotiation, he said.

In recent days Mr Callinan and another key public service union negotiator, Phil Ní Sheaghdha of the Irish Nurses and Midwives Organisation, pointed to the need for Government to address the additional unpaid working hours introduced by the then government following the economic crash nearly a decade ago.

Mr Callinan said the reversal of additional working hours, introduced under the 2013 Haddington Road agreement as an alternative to an additional pay cut at the time, remained a priority issue for the union.

Ms Ní Sheaghdha told the Oireachtas health committee last Wednesday: “Nurses in this country work a 39-hour week, a longer week than any other healthcare professional. As a result, 1½ hours per week is owed to them each week by their employer, which they currently work for nothing. That is how they view it and it must be corrected in order to retain those staff.”