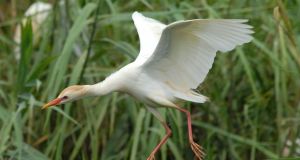 A very rare visitor to Ireland, the cattle egret, has landed at the Castle Espie bird sanctuary on the shores of Strangford Lough.

The little egrets regularly visit Castle Espie in autumn and just last week there also was the first ever sighting of a great white egret.

Now the cattle egret, which was first spotted on the shingle bank at Castle Espie, has joined its companions on the peninsula salt marsh.

The cattle egret is distinguishable from the black beaks of the visiting little egret by its bright yellow beak.

The cattle egret is much smaller than the two other visiting egrets. It takes its name from the tendency for it to perch atop livestock, from where it likes to dive down and grab the insects and worms that the cattle’s hooves disturb.

It comes from the same family as herons and storks and is normally found in western Asia, Africa, the Americas and only as far north as Portugal and Italy. Although they are starting to visit the UK in increasing numbers, it is very rare that the species is sighted in Ireland.

Speaking about the sighting, Paul Stewart, manager of the Castle Espie centre, said, “Wetlands are important habitats, which provide stop-offs that support the migration of many bird species.

“Being located on the shores of Strangford Lough, the wetlands at Castle Espie are well accustomed to welcoming all sorts of regular migrating birds, ducks and geese in autumn, including over 75 per cent of the world’s population of light-bellied brent goose. The rare sighting of a cattle egret is very exciting.”

“Recording a rare sighting such as this is a clear indication of the importance of wetland habitat in attracting migrating birds to Northern Ireland but also a good example of the impact climate change may be having on bird migration patterns,” added Mr Stewart.

Government accused of treating student nurses like ‘slave labour’ 15:59
Gardaí recover €1.8m from money mule bank accounts in major investigation 15:53
National Missing Persons Day: ‘You don’t ever give up hope’ 15:53
Three to remain in jail until they agree to stay away from Roscommon farm – court 15:38
HSE doubts private hospitals will agree new deal for Covid-19 surges 15:21