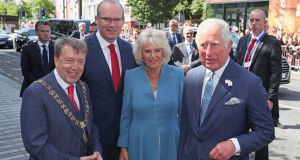 The Prince of Wales and the Duchess of Cornwall meet Tánaiste Simon Coveney and Lord Mayor of Cork Tony Fitzgerald during a visit to the English Market in Cor. Photograph: Brian Lawless/PA Wire

The Prince of Wales and Duchess of Cornwall have begun a two-day tour of the Republic of Ireland with a visit to Cork.

Charles and Camilla started by following in the footsteps of Queen Elizabeth II in 2011 and travelling to the city’s famous English Market.

They pulled up in their black Audi to the sound of a teenage combo drawn from the Barrack Street Brass Band and Music Generation belting out a clapalong version of Sweet Dreams by the Eurythmics.

Prince Charles and Camilla - wearing a powder blue suit and coat - were formally greeted by Tánaiste and Minister for Foreign Affairs, Simon Coveney before they turned and walked over to the school children thronging the Grand Parade.

Among those they met were Special Olympians Isabella McNally (7), Robert Dunne (18) and Thomas Healy (15) from St Paul’s Special School in Montenotte According to Catherine Breen and Caroline Dean from the school, the Special Olympians were thrilled to meet Camilla.

Also delighted were some students from St Patrick’s in Gardiner’s Hill, with fourth class pupils Olivia Daly (11), Claudia Chantry (11) and Megan Houlihan all getting to shake hands with Prince Charles.

“It was great- Prince Charles said ‘Hello’ to me and then he shook hands and then I shook hands with Camilla as well - I can’t wait to tell people I shook both their hands,” said Olivia, as her friends nodded in enthusiastic agreement that it was something they would remember for the rest of their lives.

The royal couple were then escorted back to the red carpeted entrance to the English Market by Lord Mayor of Cork, Cllr Tony Fitzgerald who introduced the ccouple to the Lady Mayoress, G eorgina Fitzgerald.

Security was tight in Cork for the visit, which will also see the couple visit Cork City Hall for a civic reception before Prince Charles visits University College Cork, the National Maritime College of Ireland and the Naval Service HQ in Cork Harbour.

The pair will also observe a minute’s silence for the victims of the Grenfell Tower tragedy during their visit to Cork City Hall.

While there they will be in the presence of 150 invited guests, including Olympian Rob Heffernan; All Ireland winning camogie player and mental health advocate Aisling Thompson; the Young Offenders’ writer and director Peter Foote and his wife actress Hillary Rose; and chef Rachel Allen from Ballymaloe House.

The royal couple will also be introduced to innovators such as James Whelton from Coder Dojo who set up the first ever Coder Dojo clubs in Cork. Coder Dojo is now a global network of computer programming clubs that offers free coding glasses to tens of thousands of children internationally.

The visitors will also meet with founding members of iWish, the annual showcase event set up in Cork to inspire, encourage and motivate young girls to pursue careers in Science Technology, Engine and Maths. It brings thousands of young women to the RDS and Cork City Hall every year.

The Duchess of Cornwall will visit the National Guide Dogs Training Centre on the Model Farm Road before the couple will attend a banquet in their honour on Thursday night at the Crawford Art Gallery.

They will stay overnight in Ballyvolane House in North Cork and go on to Kerry on Friday.

The visit provides a tremendous opportunity to showcase the city and build its profile as a tourist destination, according to the Lord Mayor.

Cllr Fitzgerald said Cork had benefitted hugely from the positive image of the city generated when the queen visited.

“The people of Cork have very fond memories of the visit by Queen Elizabeth II to Cork in 2011 when it was clear to all that the Queen thoroughly enjoyed her time in the city, describing it in a letter afterwards to the Lord Mayor’s office as ‘colourful and lively’,” he said.

Cllr Fitzgerald pointed out that Cork’s international profile “skyrocketed” after the visit by Queen Elizabeth II with footfall increasing by 30 per cent in the English Market where she was photographed laughing heartily at a joke from local fishmonger, Pat O’Connell.

Bookings in hotel rooms in the city and county went up by 70 per cent and with the most recent tourism statistics showing that over 30 per cent of the city’s overseas visitors come from the UK, the visit by Prince Charles and Camilla provides Cork with another great opportunity to showcase itself internationally.

The visit by Prince Charles and Camilla lead to a number of street closures in Cork city centre on Thursday including the Garda Parade, Tuckey Street, Oliver Plunkett Street, Lapp’s Quay and the South Mall from the Grand Parade to Parliament Street.

Meanwhile campaigners against a proposed €160 million incinerator planned for Rinagskiddy said they would hold a silent and peaceful protest when Prince Charles passes through the harbour village on his way to the Maritime College and the Naval Service HQ.

Back in Cork city, a group called the Cork Friends of the Ballymurphy Massacre Families are to hold what they say will be “a peaceful and dignified protest” on St Patrick’s Bridge from 7pm to 8pm when Prince Charles will attend a banquet in the nearby Crawford Art Gallery.

A spokesman for the group said that the protest was designed to highlight the continuing quest for justice by people in Ballymurphy in West Belfast when soldiers from the 1st Battalion of the Parachute Regiment were involved in the shooting dead of eleven civilians in August 1971.

The protest was organised because Prince Charles is Colonel in Chief of the Parachute Regiment, which was also involved in the killing of 14 civilians in Derry on Bloody Sunday in January 1972, and there remained “outstanding legacy of state violence which need to be addressed.”

“While the British government has apologised for Bloody Sunday following a lengthy campaign for justice and subsequent inquiry, the Ballymurphy Massacre Families have been left without justice to date. The group has campaigned for 47 years to get truth and justice.

“The PSNI and the Ministry of Defence continue to block and stall the inquests. Both organisations refuse to trace military witnesses. A similar approach has been taken to tracking guns used and vital evidence relating to the cases has disappeared,” said the spokesman for the Cork group.