Ulster rugby supporters decide against protest at next game 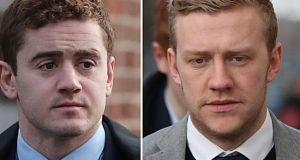 Ulster Rugby supporters have decided against staging a public protest at the next game, despite scores of fans voicing their outrage over the sackings of players Paddy Jackson and Stuart Olding.

Instead the 938-strong Ulster Rugby Supporters Club intends to write to Ulster Rugby expressing disappointment, dissatisfaction and disgust “at the recent turn of events”.

In a survey of club members, about a third of those who replied within a 24-hour deadline wanted to organise a protest or boycott next Saturday’s home Guinness Pro14 game against Glasgow Warriors.

A total of 390 members responded (42 per cent) with 34 per cent of them saying they were appalled by the sackings of the players – 21per cent backing a protest and 13per cent calling for a boycott.

The largest single group of 45 per cent, however, said they were “disappointed, but not surprised” by the decision following an internal review in the aftermath of the two players acquittal on rape charges.

A further 16 per cent of the supporters’ club’s members who replied said the club should now “move on” while 4 per cent said in effect “good riddance”. Both groups vowing to attend on Saturday.

But it also became apparent that many supporters felt a protest would marr legendary team member Tommy Bowes’ final game on Saturday.

A statement from the supporters’ club said it would be “disrespectful” and added that a demonstration would also “adversely affect” the squad in a crucial match.

Jonathan Bill, chairman of the supporters’ club, said: “I think that was one of the major factors in this. That was one of the main reasons. The fact is the fans are pretty much at the bottom of the pecking order. They provide an element of colour and the atmosphere and some of the money. But it’s the sponsors who call the tune. And that’s what this was.

“There is a lot of anger among supporters, even over the timing. They took their money off them last Friday and then made their announcement Saturday morning.”

Mr Bill said despite the crass behaviour revealed in the trial and by social media messages afterwards there was a feeling among fans that Jackson (26) and Olding (25) had apologised and that some form of rehabilitation “would have been a fairer outcome. That was not to condone in any way what happened and now it must be accepted they are not coming back. After their contracts were cancelled there was fury among the fans. That is why we conducted the survey. Fans had 24 hours to respond so I think 42 per cent is a strong turnout. But now it is time to calm down,” added Mr Bill.

The supporters’ statement also added: “This has been a grim period in Ulster Rugby’s justifiably proud history. It has proved horribly divisive and distracting. While some cannot forgive and others certainly will not forget it’s now time to move forward.”