Back to Castleblayney: Thousands pay last respects to Big Tom

Wake at Oram GFC has been going since noon, and no sign of ending 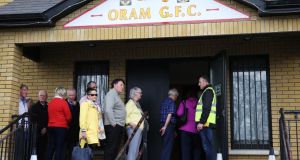 In the village of Oram, 5km north of Castleblayney, Tom McBride’s people encircle him to say farewell to a king. They welcome all comers, thousands of them, from far and wide. All day they arrive, and into the evening. Music leaks from car radios, and at one stage the strain of a few people singing Gentle Mother wafts through the Monaghan car park.

From Castleblayney a series of discreet signs brings a stream of cars to Oram Gaelic Football Club. Big Tom McBride gave the land for the clubhouse and pitch to his beloved club 25 years ago, and it was a fitting place to publicly wake him; the family home nearby is private on Thursday, before Friday’s funeral at the local church.

The hall is dominated by an enormous painting of Big Tom playing the guitar. Below it the coffin is cordoned off – no touching, no photographs. He looks at peace, with a guitar at the foot of the coffin, a drape with his image laid over him, and a single white rose. His tie has musical notes on it, and the pins on his lapel include a couple of guitars.

Faintly in the background, under the hum of the crowd, Big Tom’s hits are playing. It is all done with dignity, efficiency and courtesy

They line up through the length of the hall and outside to pay their respects to the McBride family, and to see Big Tom for the last time. Then upstairs for tea and biscuits. Faintly in the background, under the hum of the crowd, Big Tom’s hits are playing. It is all done with dignity, efficiency and courtesy.

Tom’s brother-in-law Paddy King says there was “no big-headedness about him”. He played bass guitar with Tom, and “sang the pop stuff”.

Margo O’Donnell comes over, and they talk about Tom and his wife, Rose.

“They were unreal,” Margo says.

Margo says Rose’s priority before she died, in January, was for Tom to “get the CD done”.

The Pleasure Has Been Mine will be released with a duet with Margo of A Love That’s Lasted Through the Years. “Look after that man of mine,” Rose said before she died.

Margo recalls visiting Tom at home after her death; he was in bed, and she noticed his pillow was wet with tears. “The boss is gone,” he said.

Their neighbour Kevin McCooey, who played saxophone with Tom’s band, said the singer was like Cliff Richard. “He had a hit record every decade.”

McCooey’s recalls playing, in his 20s, with Big Tom & the Travellers at the Galtymore dance hall in Cricklewood, in London, and people crying at the front when Tom sang Gentle Mother. “They were young emigrants. I wondered, Had they lost their mother, or were maybe missing her?”

The Galtymore closing was “the lonesomest night of Tom’s life”, he said.

His father was a Big Tom fan, and Ryan grew up with Tom and Margo, he says. When he was 12 he played drums in a band supporting Big Tom. “I used to say, ‘I played Big Tom’s drums.’ ”

The country star TR Dallas says Tom “took a song, and regardless of whoever wrote it or had it, in his good Monaghan accent it would become a Tom song. He was a great singer.”

Marty Mone, another young Monaghan star, recalls as a seven-year-old seeing a tape of Big Tom singing in a packed dance hall, with a rose stuck in his guitar, and he knew he was going to be a singer. This is “Big Tom’s country. You realise that’s why people know Castleblayney.”

Sheila Comiskey, a neighbour, says “he never said no to anyone”, and recalls him inviting a friend’s dying aunt to his home. His fan Anna Gallagher travelled on the 9am ferry from Arranmore, then drove for three hours to pay her respects. She comes to the Oram St Patrick’s Day parade, led by Big Tom, and spent her 60th birthday at his house. “It was the last word.”

He was a gentle giant on and off the field, but if some fella wanted to play it the other way he facilitated him. He could look after himself

Mickey Quinn, another neighbour, is wearing a high-vis jacket. His first memory of Tom is playing football. “He was finishing when I was starting, and he looked after young fellas like me. He was a gentle giant on and off the field, but if some fella wanted to play it the other way he facilitated him. He could look after himself.”

Breda O’Sullivan arrives after a long drive from Cashel, Co Tipperary – six hours, including a half-hour stop. She came on behalf of her mother, Josie, who died four years ago. “She loved him.” She pauses. “He had great diction. You could always understand the words.”

She is glad she came, and now she’s going to turn around and head home again.

School ordered to reopen after closing due to Covid-19 fears 19:30
Rescue operation under way to prevent freighter hitting rocks 19:22
Brian Hayes says he considered resigning over Oireachtas golf dinner 19:21
Warning over impact of timber shortages due to forest licence backlog 19:14
One hundred Irish retailers for all your online Christmas shopping 19:08