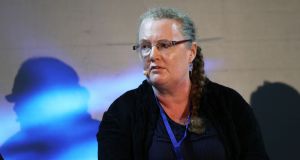 A University College Dublin (UCD) professor, who chairs the Eurosceptic Irish Freedom Party, has been asked to resign from a leading European Union scientific committee over online claims she made about the Covid-19 pandemic.

In an hour-long interview with a popular alt-right activist on May 10th, which has been viewed hundreds of thousands of times, Prof Dolores Cahill promised to “debunk the narrative” of the pandemic.

Lockdown and social distancing is not needed to stop the spread of the virus, she said. People who recover are then “immune for life” after 10 days and deaths and illnesses could have been prevented by extra vitamins, she claimed.

People with underlying health conditions, such as cystic fibrosis, could freely engage in society during the pandemic after spending a few weeks building up their immunity in this manner, she went on.

Opposing vaccinations, Ms Cahill said “politicians and the media” are using Covid-19 “as a fear-mongering propaganda tool to try and take away rights from people and to make them more sick and to force vaccinations on us.”

However, the European Commission said the claims made by Ms Cahill, a professor of translational medicine in UCD, could cause “significant harm”, if taken literally.

Following this, Ms Cahill was asked to resign as vice chair of the Scientific Committee of the Innovative Medicines Initiative (IMI), a partnership between the European Commission and the drugs industry to promote new drugs.

“Professor Cahill has been requested by the Chair of the Scientific Council of IMI and the Executive Director of IMI to step down from her function,” the commission told The Irish Times.

“While as a private person, Professor Cahill is entitled to express her points of view, these are not compatible with the scientific foundations of the Innovative Medicines Initiative,” said a Commission spokesperson.

Ms Cahill’s claims have also caused Berlin’s Max Planck Institute for Molecular Genetics (MPIMG), where she worked for eight years, to distance itself, saying it did not want to be associated in any way with the claims made.

The IMI echoed these sentiments, saying that they were “shocked” to see her statements and that her views do not reflect those hold on Covid-19 by of IMI.

A former Max Planck colleague, Prof Hans Lehrach said he was “really surprised” by Ms Cahill’s comments: “I have no idea why she says things like that,” he said.

“There is absolutely no proof that people recovering from the disease are immune for life,” he said, reflecting the World Health Organisation’s understanding on the subject.

Vitamins and minerals do help the immune system, but Mr Lehrach said he would “very much doubt” that they would defend against the virus. The vulnerable would be “pretty insane” to engage widely during the pandemic.

Ms Cahill also supported the use of hydroxychloroquine to treat Covid-19, one that has been supported, too, by US president Donald Trump. The drug, she said, is “safe and effective” in treating the disease.

However, Prof Lehrach said that he would be “very careful” with hydroxychloroquine as testing had proven that it is ineffective as a treatment and has been known to cause death due to heart complications.

The original interview has since been removed by YouTube, but versions can still be found easily online and have clocked up hundreds of thousands of views. Ms Cahill has given a number of similar interviews since.

Ms Cahill is a member of the faculty at UCD school of medicine, where she is the module co-ordinator on a number of subjects, including one taught to first-year medicine students called Science Medicine and Society.

When approached for comment, UCD confirmed that she is part of the university’s faculty, but refused to comment further on her claims, saying only that they are “her own views”.

Ms Cahill unsuccessfully contested the general election for the Irish Freedom Party in February, eliminated on the second count in Tipperary with a total of 527 votes. She has not replied to requests for comment.