U2 stars enjoy political and cultural day off in Paris 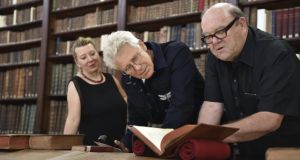 Adam Clayton of U2 and the band’s former manager, Paul McGuinness look at an English-Irish dictionary dating from 1768 as Irish College director Nora Hickey M’sichili looks on.

What does an Irish rock star do on their day off in Paris?

At the midpoint of their four concerts in Paris this week, U2’s lead singer and bass guitarist chose radically different options on Monday: politics for Bono, culture for Adam Clayton.

Bono continued the political themes of the show by calling on President Emmanuel Macron. The Élysée Palace said they discussed next year’s G7 summit of the world’s leading economies, particularly with regard to development aid, equality for women and a partnership between Europe and Africa.

Bono and Macron communicate regularly by text message. Macron has staked a claim to be the leader of those liberal democrats who are resisting the rise of populist nationalism in Europe.

Bono believes, like Macron, that “Europe is a thought that needs to become a feeling.”

The current U2 show includes a few bars from the European anthem and a giant European flag.

Bono has resuscitated the malevolent MacPhisto character first seen on the Zoo TV tour in the early 1990s. Video technology transforms his face into a twisted, diabolical character who channels “my friend Donald T” and mocks those who demonstrated for action on climate change at the weekend. “F*** climate change!” the character concludes.

Bono also criticised Marine Le Pen, the leader of the far-right party formerly called the Front National. “Madame Le Pen, you think you can just change the name and people will forget your party doesn’t like Jews and black people?” he said.

‘Preached to the choir’

Was it too political? The Agence France-Presse reported that Bono “preached to the choir . . . to the great displeasure of the three other members of the group”.

“Of course we support and endorse all those views,” he insisted during a visit to the Irish College, the flagship cultural centre that attracts 75,000 people annually. “If there was some comment about it, it’s really about the balance between the talk and the music.

“As musicians and concert-goers, probably a little bit more music is what people enjoy, but it’s really hard to do music without some messaging as well. In a way, it’s how we all identify.”

In the show, Bono also talks about how U2’s phenomenal success went to their heads in the late 1980s.

“Success and, more pertinently, fame and the sort of wealth that means you don’t have to take responsibility for anything,” said Clayton.

“If that happens to you in your 20s, as it did for us, it can have a distorting effect, because you think you’re invincible . . . It takes about 10 years to realise what’s happened and to adjust to it.”

Clayton was given a tour of the college by director Nora Hickey M’sichili, Eugene Downes, who heads the Irish half of the board, and Kathy Gilfillan, the Dublin publisher who is also a board member. Her husband Paul McGuinness, who was U2’s manager for more than 30 years, also participated.

McGuinness recalled asking to stage a U2 press conference at the college in the 1980s. “I called here and I got a grumpy old Polish priest and he said ‘Certainly not,’ he laughs “We eventually held it at Kitty O’Shea’s [pub].”

In perhaps the most touching moment of his visit, he proudly showed his hosts a photograph of his Brazilian-born wife, Mariana, receiving her certificate of Irish citizenship in Dublin on Monday.