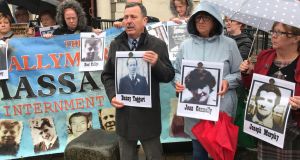 Families of those killed in the Ballymurphy massacre outside the Royal Courts of Justice, Belfast ahead of a preliminary Photograph: Rebecca Black/PA Wire

A new inquest into the Ballymurphy massacre in which 11 people were killed is set to start on November 12th.

The fresh inquest into the shootings, which took place in the Ballymurphy estate in west Belfast between August 9th and 11th, 1971, had been due to formally open on September 10th.

The shootings took place as the British army moved in to republican strongholds to arrest IRA suspects in the wake of the introduction by the Stormont administration of the controversial policy of internment without trial.

The new date for the inquest emerged during a preliminary hearing, sitting at Belfast High Court before Presiding Coroner Siohban Keegan, on Monday and comes after years of preliminary inquiries.

Counsel for the coroner said it will initially hear statements from the families of those killed before moving to hear evidence in the case.

He said they hope to start hearing evidence from military witnesses early next year.

The Coroner’s Office is currently examining a database of the names of almost 5,000 former soldiers it received from the Ministry of Defence last month.

The spreadsheet is believed to contain 4,773 entries of individuals from the Parachute Regiment, Queen’s Regiment and Queen’s Division who had been serving at the time of the shootings.

The Coroner’s Office is attempting to trace former soldiers who may have been at Ballymurphy during the shootings to call as witnesses to the inquest.

It will sit four days each week from Monday to Thursday, with Fridays set aside for matters including the ongoing work to trace potential military witnesses.

“The opening will include an overview and the background to the incident,” counsel for the Coroner added.

He also revealed the inquest will look at the investigation carried out by the Royal Military Police following the incident, the original inquest, the Historical Enquiries Team report and the directions given by the Attorney General.

In 2011, Northern Ireland’s former Attorney General John Larkin directed that an inquest be held into the shootings.

That came after the Northern Ireland Office ruled out any public inquiry into the killings akin to the Bloody Sunday Tribunal.

British soldiers have long been held responsible for killing 10 people in Ballymurphy but the accepted narrative became clouded earlier this year when former UVF members came forward to claim their organisation was also involved.

A Catholic priest and a mother-of-eight were among those killed during three days of gunfire involving members of the Parachute Regiment. Another man died of a heart attack following an alleged violent confrontation with the troops in the west Belfast estate.

Around 100 supporters gathered outside Belfast High Court on Monday in solidarity with the Ballymurphy families before the hearing.

Speaking outside court Briege Voyle, whose mother Joan Connolly died in the shootings, said they are determined to get the truth from the inquest.

“This is a very very big day for us, we have struggled hard for this for the last 20 years,” she said.

“At the end of the day, our loved ones were murdered, cold blooded murder and they have to admit it.

“Those soldiers are no different to anyone else, they have to answer for it.”